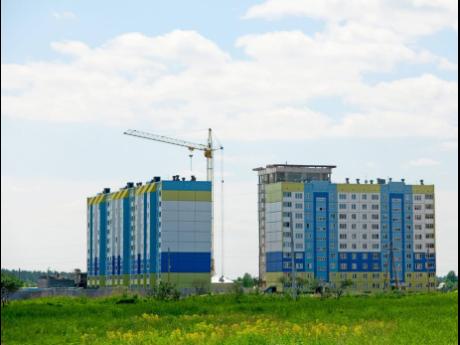 WESTERN BUREAU: As high-rise buildings become dominant features throughout the capital city, Kingston, a government technocrat has admitted to the need for a single-family and multifamily zoning category for the metropolis. Senior building...

As high-rise buildings become dominant features throughout the capital city, Kingston, a government technocrat has admitted to the need for a single-family and multifamily zoning category for the metropolis.

Senior building inspector at the Kingston and St Andrew Municipal Corporation (KSAMC), Jeremy Lawrence, made the declaration during a Gleaner Editors' Forum yesterday morning, stating he was willing to put this recommendation on the table and secure it with his head on the block.

However, architect Dr Patricia Green, of the University of Technology (UTech), stopped him in his tracks, adamant that the city of Kingston started out with single-family lots, and there were a number of residential and citizens associations who would like to have the developmental order retracted from their neighbourhood.

According to her, using the developmental order, they went in and split communities, such as the Golden Triangle, “where someone from somewhere went in and drew a line through it, and it is wrong”.

Green criticised the town planners and architects of the city for what she said was a bad approach to planning.

She argued that there was no need for a new zoning category, because it already exists. Every single community, she said, was residential, unless it has been changed for commercial purposes or mixed use.

Although not necessarily supporting Green in her stance, deputy director of the Natural Resources Conservation Authority, Christopher Whyms-Stone, admitted that there was a need for clarity in relation to how the city was going to be designated.

“Single-family only, that is the elephant in the room; that is the question that needs to be answered,” said Whyms-Stone, who argued that measuring density by habitable rooms per acre - as opposed to dwellings per acre - was an archaic way of determining development in a city in need of housing.

But Green was not giving up, asking if these single-family units would become multiple-family structures.

In no time, the KSAMC building manager responded that residents must also understand that the city will not be home to single-family dwellings forever, there must be a timeline.

He pointed out that no government administration will make, for example, Kingston 8, into single-family only.

Two of the panellists – Anthony Davis, president of the Charlemont Drive Citizens' Association, and Enith Williams, past president of the Golden Triangle Neighbourhood Association – say the multiple constructions throughout the city have brought noise pollution and dust, making their communities uncomfortable to live in.

Williams qualified that nothing could be further from the truth, that the people in the triangle were against development in the community.

“We appreciate that Kingston is a growing, vibrant city, but without proper planning for how the city is being developed, for how approvals are being granted to accommodate the range of citizens, in 10 to 15 years, we have no idea what the city will look like,” she stated.

She lamented the fact that high rises are being erected, and attempting to accommodate them by expanding the roads was not the direction the rest of the world was heading in. As well, laid-out cities are pedestrianising and allowing their residents to walk around.