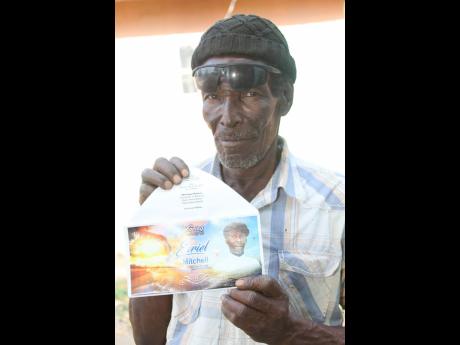 Nathaniel Stewart
Victor Bernard, of Effortville, Clarendon, looks at the funeral programme of his friend Evriel “Cootie” Mitchell as the family reflect on his passing yesterday.

For eighty-year-old Perris Samuels, July 21 each year was usually a day of happiness as she celebrated the anniversary of the birth of the fourth of her five children. This year, however, the celebratory spirit was dampened as the birthday festivities turned into a memorial for her son’s 53rd birthday.

Her son, Evriel ‘Cootie’ Mitchell, a baker of Leon Avenue in Effortville, was among five people killed during a murderous rampage in December last year. A missing bike was said to be at the centre of the killings. When The Gleaner visited the family home yesterday, the grief on relatives’ faces was evident as they remembered the man they described as jovial, one who had earned the love and respect of the community. Mitchell’s elderly mother said she still harbours fears.

“Bwoy, this place is not nice at all,” she said. She said the tragedy that claimed the life of her son would forever be etched in her mind. “Me can never get over it ‘til me die,” she bemoaned. “Sometimes me feel all lright, but sometimes me feel down. This morning me get up and me just feel down ‘cause a him birthday. Him and him friend them always have them drink and sometimes him go down a him sister,” Samuels told The Gleaner.

Mitchell’s cousin, Gwendolyn Foote, was sporting a shirt bearing the epitaph of her late cousin. Foote recounted previous birthday celebrations. “If he was here, we would be having a get-together of some sort and just hanging out with him. You can call on him to do anything at all. He is always reliable. You can always count on him,” she said.

According to relatives, Mitchell and his neighbour, 57-year-old taxi driver Michael ‘Shutty’ Henry, were discussing a trip into Kingston when they were pounced upon by gunmen, who robbed them of their cellphones before killing them.

Victor Bernard, Mitchell’s colleague of over five years, said celebrating Cootie’s birthday without him has been a hard pill to swallow. He shared that they are, however, grateful and that he lived a decent life and was known for his hard-working demeanor. “We afi gwaan hol’ it. A nuh like him a troublemaker; is a hard-working man. Anybody call him fi work, him gone. A just him that,” he told The Gleaner.

A pregnant woman, who was reportedly on her way from church, was also shot during the attack. Miss Peggy, her aunt, told The Gleaner that her niece has not been doing well since the incident. “She was six months’ pregnant and she lose her baby. The umbilical cord shoot off, but she give birth to the baby, and the baby die,” she disclosed, adding that the community is a “dreadful place” to live.