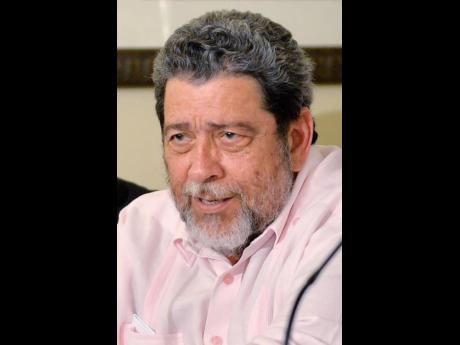 St Vincent and the Grenadines Prime Minister Dr Ralph Gonsalves has been released from a Barbados hospital where he underwent several tests yesterday morning.

Gonsalves was hit on the head with a stone near the Parliament on Thursday as he made his way there amid a massive protest in the capital Kingstown.

Opposition supporters were protesting impending changes to the law to make it mandatory for frontline workers to be vaccinated against illnesses like COVID-19 that trigger a national emergency.

Speaking from Barbados where he was flown yesterday morning, Gonsalves said doctors have not detected any neurological issues but said he suffered a concussion.

The prime minister also said he has been experiencing headaches and dizziness.

Doctors have recommended further tests in another four to six weeks and Gonsalves said he will follow their suggestion.

They will also continue to closely monitor him to determine if there is any bleeding on the brain.

Meanwhile, Gonsalves said the person who threw the object at him intended to harm him.

“I take the assault upon me not just as an injury or an act of battery,” said Gonsalves . The intention was to hit me and it did and to cause me serious damage or indeed loss of life.”

The prime minister said very soon, he will say more about the attack and will call out the instigator.

At the same time, he said he has returned the call of Opposition parliamentarian St Clair Leacock

However, Gonsalves said he did not and will not return the call of Opposition Leader Godwin Lorraine on Friday.

Gonsalves also said he views as “sacred” the votes that placed him in the Parliament.