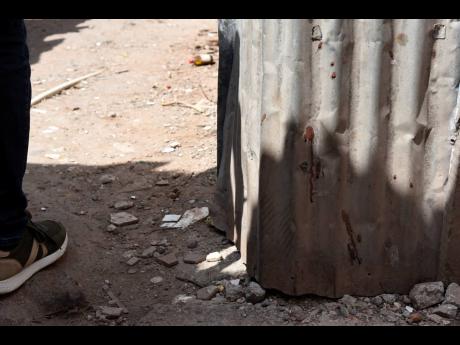 Nicholas Nunes/Photographer
Bloodstains on the ground and zinc fence of a resident’s home in Trench Town are tell-tale signs of the brazen attack by gunmen on Thursday evening which left six persons nursing bullet wounds. The residents were hit during a drive-by shooting.

Trench Town residents claim that their community will never return to the days of peaceful living and enjoyment following Thursday night’s senseless attack that left six persons, including a woman, nursing gunshot wounds after a drive-by shooting.

The brazenness of the attack which occurred very close to a security checkpoint is another frightening development.

One resident complained that it appears members of the security forces assigned to the ZOSO did not have any vehicle to pursue the gunmen. “How can you defend people? If dem did have a vehicle, dem would catch the car because a suh the car go,” the resident bemoaned.

The incident took place about 6:30 p.m. near the intersection of Fifth Street and Collie Smith Drive.

When The Gleaner visited the community yesterday, bloodstains were visible from the roadway leading into the yard where the shooting occurred as gunshots riddled the board structures and pierced furniture.

“A six people get shot enuh. One of dem get graze on him foot and him just tek him graze and gone and no bother report it,” a resident told The Gleaner.

The residents said the onslaught occurred in less than 60 seconds.

“All of that gwaan in less than one minute. The man just push through the gun and blow, blow, blow, all type of sound,” a resident said. The Gleaner was informed that not even children, who were out and about playing, deterred the gunmen from carrying out their dastardly act.

Some residents expressed a desire to relocate but said they had nowhere to go.

“The woman sat in the chair here so and chuck out of the chair and see where the shot go right through the chair. If she never get flat, she dead,” an elderly man said.

The Kingston West Police Division where Trench Town is situated has seen double-digit increases in murders and shootings year-on-year.

As at July 29, murders and shootings stood at 71 and 73, respectively. That represents a 22 and 40 per cent increase, respectively, over the corresponding period in 2020.