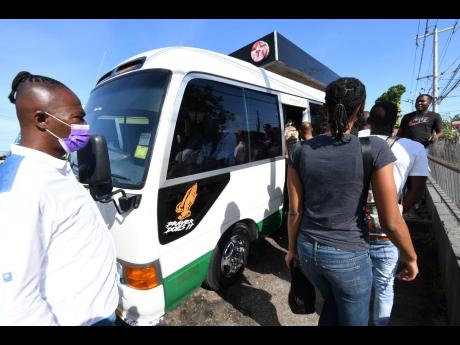 Rudolph Brown/Photographer
Passengers board a bus in Spanish Town Monday, the first day of a hike in fares.

In open defiance of warnings not to overcharge commuters, many taxi and bus operators threw caution to the wind and imposed their own transportation rates, with some collecting more than double the prescribed 15 per cent hike.

Monday’s new regime was the fulfilment of the chaos forecast as cabbies and busmen usurped the power of the Transport Authority, the state regulator, citing eight years without an increase as justification for their revolt.

Winston Kirkwood, who plies the Spanish Town to Red Pond route, said he and other operators have added $40 to the original fare of $100.

And Toney, who operates from Spanish Town to Naggo Head, said that cabbies on that route are also charging $140.

There were similar scenes at high-density transport hubs such as Papine, St Andrew, where operators insisted on charging 50 per cent more than the pre-hike fare.

But a busman who gave his name as ‘Kisko’, who travels between Kingston and Old Harbour, said he did not capitalise on his first trip out on Monday as three-quarters of his passengers claimed they had no knowledge of the fare increase.

Kisko, however, believes that the 15 per cent hike will make little difference to easing his operational overheads or improving his net income.

Although private operators were granted an increase, fares remain static for the state-run Jamaica Urban Transit Company (JUTC), the behemoth that bleeds the country’s coffers of billions of dollars annually.

Fare increases have remained within the remit of the transport minister – a power play by design that allows the Government to subordinate the economic imperative of the JUTC to the political expedience of state welfare.

Dr Peter-John Gordon, economics lecturer at The University of the West Indies, Mona, said the JUTC is a victim of its design. The upshot: Because the bus company is not within a market structure, its success rate is not centred on profit.

“You want the fares to remain relatively low ... but the lower the fare is, the less likely the company will break even, so the Government has a both political and economic problem,” Gordon told The Gleaner on Monday.

The JUTC projects 28 million annual passengers to use its service, up from 20 million in the previous fiscal year, according to information in the Jamaica Public Bodies published by the Ministry of Finance.

The increase in passengers will assist the company in earning $2.4 billion in fares for the 2022 fiscal year, up from $1.47 billion a year earlier.

The fare projection, while larger than that for the 2021 fiscal year, pales in comparison to the amount earned prior to the pandemic at $3.27 billion for fiscal year ending 2020.

Regardless of revenue rebound or lumpsum injections, the company still makes a loss.

For the 2022 fiscal year, it’s projected to make a loss of $11 billion before Government grants, compared to a $4.1-billion loss a year earlier. The loss will only add to the previous red ink over the years, which is projected to accumulate to $30 billion.

But JUTC Communications Manager Cecil Thoms has countered the narrative of gloom.

“It is not the first time that people make these predictions about the JUTC,” said Thoms of doomsday prophets.

Likening the bus company to a social good which costs “millions and billions of dollars”, Thoms insisted that the JUTC was no different from many other providers of public transport across the world.

He praised the bus company’s finance department as “magicians” that have kept the JUTC afloat despite reduced ridership linked to COVID-19 curfews, the shuttering of schools, and increased work-from-home arrangements.

“I don’t believe that we will be crashing any time soon,” Thoms told The Gleaner.

With a current roll-out of 210 buses from a fleet of more than 300 buses, Thoms is eyeing an increase of 250-260 buses to maximise operations and boost passenger take-up.