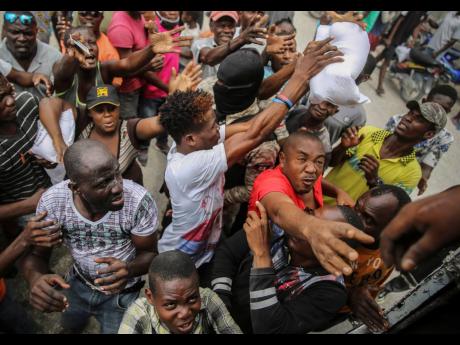 AP
Earthquake victims scramble for handouts of rice at a food distribution site in Les Cayes, Haiti, on Monday. Haitians are searching for survivors and the dead in collapsed buildings following the powerful earthquake over the weekend.

Several local and international charity organisations are muscling up aid for earthquake-ravaged Haiti amid apocalyptic scenes of tragedy in the country’s southwest.

Food For The Poor Jamaica is targeting at least US$50,000 in a fundraising drive ( www.foodforthepoorja.org/haiti-relief/), and the charity’s Florida branch dispatched on Sunday five 40-foot containers laden with relief supplies to the epicentre of the crisis in Les Cayes, 80 miles southwest of the capital, Port-au-Prince.

Rescue operations continued on Monday in a desperate search for survivors. The death toll has risen to 1,419, with more than 6,000 people injured. Preliminary estimates also indicate that in some areas, seven out every 10 homes have been demolished.

Three departments in Haiti have been worst affected by the 7.2-magnitude temblor, with the communes of Jeremie, Les Cayes, and L’ Asile hardest hit.

Pastor Lionel Riche, who is in Jeremie, described the situation as dire.

“The condition is very deplorable. The houses have been destroyed. It is a catastrophe. We have electricity and water, but it is not potable,” Riche told The Gleaner on Monday.

He is, however, grateful that no congregants or family members were lost and that his church sustained minor damage.

“The condition is deplorable, but everyone in my family is alive. We have to accept that this is what God wanted. Our main priority now is to fix the church and our house,” he said.

Jamaica Baptist Union affiliate pastor Jean Rony Bataille has also been affected as his family lives in the vicinity of Les Cayes.

Bataille said that aftershocks and disruptions to the country’s telecommunication network have amplified fears for families unable to make contact.

“Up to yesterday (Sunday), it was difficult to get in touch with my family members that are living in the area where the earthquake happened. This created unease … ,” Bataille told The Gleaner on Monday.

“Where I am living, we had some aftershocks and people were running out of their houses, and that is a bit scary. We fear the aftershocks here because of the memory of the 2010 earthquake.”

He is hopeful that he will be able to make contact with his relatives before the country is affected by rain associated with Tropical Depression Grace, which could add woe to the crisis-hit country, which is in transition after President Jovenel Moise was assassinated on July 7. Up to 15 inches of rainfall has been forecast to hit the country.

Chief operating officer of Food For the Poor Haiti, Mario Nicoleau, said that four of the organisation’s 12 distribution centres are located in areas affected by the earthquake.

Some centres were replenished as recently as Friday in anticipation of the hurricane season. However, resources have been redeployed to house displaced people affected by gang warfare.

“The main access road to the south, one portion of it was covered with gangs, so there was very limited access ... ,” Nicoleau told The Gleaner on Monday.

“We had to do what we call our ‘Mission Impossible’, where we replenished three of our distribution centres. The last one was done on Friday, so thankfully, we had sent some needed materials before the earthquake had hit on Saturday.”

The organisation was also able to send a convoy of four containers and five trucks to Les Cayes on Monday although the need far dwarfs the current supply. Water continues to be scarce and hospitals have been overrun with injured citizens.

The threat of rain has also made accessing affected communities difficult as landslides have made some roads impassable.

Nonetheless, Nicoleau is thankful for the support received so far from Jamaicans who have donated through the local Food For The Poor office.

Executive director of Food For The Poor Jamaica, Kivette Silvera, said that the organisation is welcoming donations, especially tents, hygiene and medical supplies, food, and water. Interested persons are invited to call 876-984-5005 or visit the website www.foodforthepoorja.org.

The Rotary Club has also been mobilising support for Haiti.

Committee chair of the Rotary Haiti Earthquake Response Team, Haresh Ramchandani, said that the group has the logistical know-how and access to transportation to dispatch donations.

For more information, contact can be made with Liz Goggins at 340-771-4420 or email rotary7020relief@gmail.com. Monetary donations can be made to https://www.paypal.com/donate/?hosted_button_id=ESJ9N2CASADV2.

Persons wishing to make donations to Food For the Poor Jamaica may use NCB account #471043885 at the St Jago Shopping Centre branch, Spanish Town (branch code: 00047), or utilise the NCB Direct Banking Unit.

The organisation will also be hosting a Day of Prayer for Haiti on August 18 in collaboration with Food For The Poor Inc.