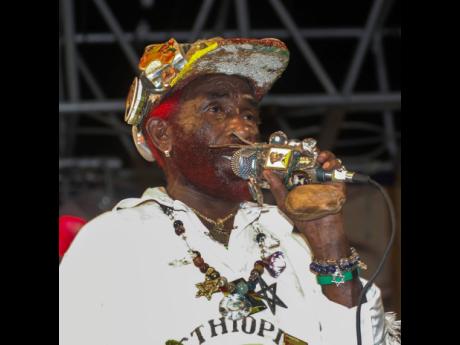 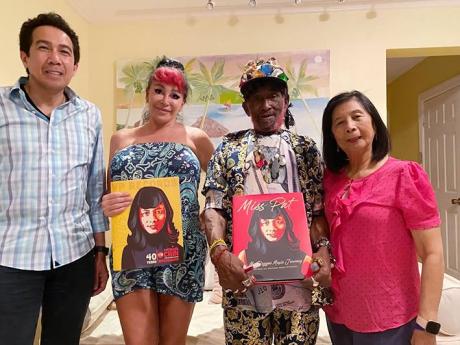 Contributed
Lee ‘Scratch’ Perry and his wife Mareille hold copies of Patricia Chin’s book, ‘Miss Pat: My Reggae Journey’, which she presented to them when she visited the couple at their home in Negril in July. At left is VP Records CEO Chris Chin. 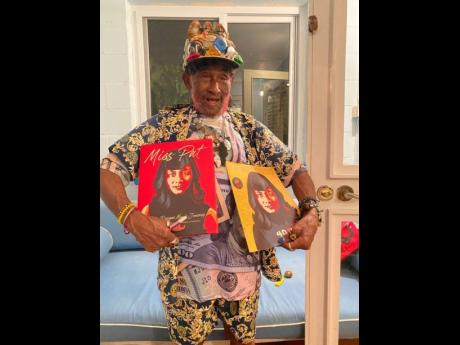 All things begin from Scratch.

Reggae historian Roger Steffens' simple yet profound conclusion captured the genius of Jamaican music's quintessential eccentric Lee 'Scratch' Perry, whose praise in death was as loud as his acclaim in life.

The 85-year-old Perry, an integral figure in the success of dub music, died on Sunday morning at the Noel Holmes Hospital in Lucea, Hanover.

He had been residing at his Point Village home in Negril rather than his mansion in the Swiss Alps.

Describing the Grammy winner and five-time nominee as “a wackily creative combination of George Clinton, Frank Zappa, and Monty Python”, Steffens joined the chorus of fans who praised the late singer as a prodigy and “one of the final members of Jamaican music's pantheon”.

“Jah's jester has gone home. ... He called himself Scratch because all things started from him,” Steffens told The Gleaner on Sunday.

“His groundbreaking work with The Wailers trio is regarded as their finest, and rightly so. His energy was inexhaustible. He was doing three-hour shows right to the end, brimming with infectious joy and impish mischief.”

Perry has long been described as an insane charlatan – an attribution he embraced in the hit single I Am a Madman.

His bizarre onstage antics were as jaw-dropping as his musical talent.

Born in Kendal, Jamaica, as Rainford Hugh Perry in 1936, the musician released dozens of albums during a career that began in the late 1950s and spanned more than six decades. In 2003, Perry won the Grammy for Best Reggae Album for his recording Jamaican ET.

It was in 1966 that the dub wizard left Clement 'Coxsone' Dodd's Studio One, and as a parting shot, produced the song The Upsetter, which is said to have “marked the birth of the incendiary alter ego that Perry would carry with him for the rest of his life”.

Perry's passing took many by surprise.

He was active on social media up to the day before his death, posting a video in which he looked fit and healthy, while informing fans of his new plans.

But music industry personality and longtime friend Colin Leslie said the Upsetter's ending could not have been better scripted.

“He was a man who travelled the globe and who lived in various parts of the world. Lee Perry was huge. I went to London and saw his face on the side of one of those double-decker red buses advertising Guinness. And yet he died in a quiet hospital in Lucea on a lockdown morning. I think he planned it,” Leslie said.

Leslie remembered his first meeting with Perry quite vividly. He was playing at a club near the waterfront in downtown Kingston when Perry came in front of him and told him how to play a particular bass line.

“Scratch was impeccably dressed at the time, but he had on no shoes and socks. I subsequently heard the same bass line in a song, and I figured he was just using me to test it out. David Katz, in the book People Funny Boy, described Scratch as 'one of the most creative figures of the 20th century', and that was so true,” Leslie told The Gleaner.

Perry's work with Bob Marley has been well-documented, and two songs, Duppy Conqueror and Small Axe, stand as monumental tributes to the man who played a role in training the singer that would eventually become Jamaica's most famous son.

“He trained Bob Marley how to sing. If you hear Scratch sing, he sounds exactly like Bob, but that is because he really helped to mould Bob. Chris Blackwell said Scratch was one of the most brilliant recording engineers and producers he has ever come across.

“In recording, there is an instrument with a VU meter, and it alerts you to the section which you are never to record in. It's the red zone. Well, Scratch always stayed in the red zone,” Leslie recalled.

“I have known Scratch personally and professionally for decades. I consider him the consummate music producer whose par excellence innovations, worth, and work elevated him to also be recognised as an artiste. There was only one Lee 'Scratch' Perry,” Clarke declared.

VP Records CEO Chris Chin recalled his last visit with Perry at his home in Negril in mid-July. Chin said that he reminisced about his parents' role in helping Perry start his record label and the close and lasting friendship the family shared over the years.

“He will be sadly missed, but his music will bring joy for generations to come. He was undeniably a true icon,” Chin said.

She, too, had taken the trip to Jamaica last month just to visit her friend, with whom she shared a friendship harking back 60 years at Randy's.

“This is really difficult for me. It is hard for me to find the words to communicate the feeling I have this minute,” said Mrs Chin.

“I sadly miss my dearest friend Lee Perry. ... My family and I are heartbroken.”