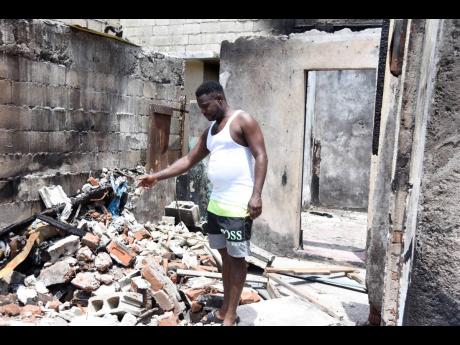 Nicholas Nunes/Photographer
Gregory Wright lost everything in a fire that consumed his home and more than 10 others on Oxford Street in Kingston Western on August 3. Wright points to the rubble that is left of his house on August 20.

Fire victims of Oxford Street are urging Kingston Western Member of Parliament Desmond McKenzie to follow through on commitments they said he made in the wake of a midsummer tragedy.

The residents, whose homes were consumed in an inferno around 4 p.m. on August 3, said that they have yet to be contacted by McKenzie or his aides who reportedly inspected the premises on August 5 and offered assurances of a helping hand.

Emerging from neighbouring homes of family members and friends who have allowed them to temporarily share their dwellings, the residents said that they were in distress.

McKenzie, they said, had instructed them to rid the area of the charred rubble for an estimate of the damage to be conducted and for materials to be procured to assist in reconstruction.

A month later, the residents claim that no official has returned to the location.

Efforts to contact McKenzie over the last two weeks have been unsuccessful as calls to his cell phone have gone unanswered. Questions were also routed to him via email through the local government ministry, which he heads.

Georgian Cameron, who lost everything in the fire, said that the residents feel forsaken.

“We nuh see back nobody. All now nobody nuh call,” she said on August 20.

Cameron said that names, numbers, and other information had initially been collected.

Checks with the residents on September 5 revealed that their fortunes have not changed.

The fire, which was allegedly caused by faulty wiring, left more than 10 homes uninhabitable, with residents as young as five years old homeless. There were no deaths.

Gregory Wright said that on the afternoon of the blaze, he was alerted by the heat radiating from the flames, which caused him to spring to his feet in a bid to salvage a few items.

He managed to save his work uniforms, a television, and a boom box before it became impossible to re-enter the premises.

Ahead of today’s start to the new academic year, mothers said they were in desperate need of school supplies for their children to resume virtual classes.

Terry Luban, mother of four, lost all her family’s belongings, including important documents, in the flames.

Luban said that it was her sister who has helped to put clothes on her family’s backs.

“We just a expect a likkle help from somebody ‘cause things rough at this time,” Luban told The Gleaner.

Single mother of three, Stacy Ann White, has no family home to which to turn.

As a result, she has made a temporary home among the painful reminders of that tragic afternoon.

“We kinda fix up a likkle part so we can gwaan stay,” she said recently, referring to a half-burnt structure on to which she mounted tarpaulin to shelter from rain.

“It was terrifying ... . I wouldn’t like for anyone to go through something that I experienced,” White said of the August fire.

She also expressed dissatisfaction with food and other welfare gifted by the Ministry of Labour and Social Security.

White, who was affected by the flood rains of Tropical Storm Grace in mid-August, is eager for help to find a home for her and her children “just to get back that comfort zone that I had before”.

As other hardships face the residents, including several rounds of no-movement days to curb the coronavirus outbreak, they expressed uncertainty about how they will survive.

“We have to buy food every day ... . Right now, me nuh buy nothing for evening dinner,” said one of the fire victims.