⬛ Murders on the rise as other serious crimes decline in Sunshine City ⬛ Municipality has outgrown ‘100 Man’ Police Station, argues councillor 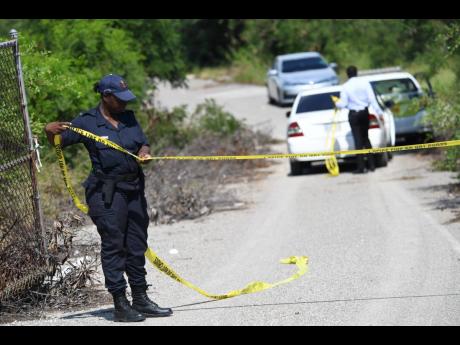 File
A policewoman cordons off the entrance to the now-defunct fishing village off the Portmore toll road in St Catherine, where the body of a woman was discovered in November 2019. 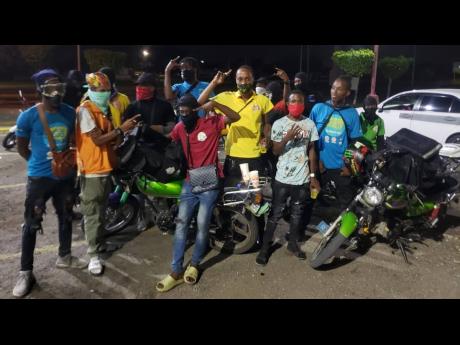 Photo by Corey Robinson
Portmore ENDS bikers pose for a shot after completing their rounds on a no-movement day two weeks ago. 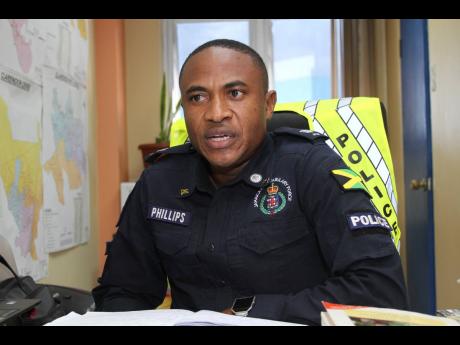 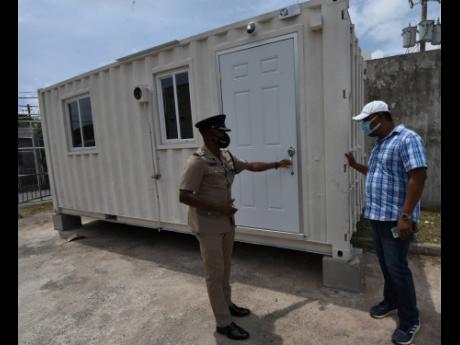 Ian Allen/Photographer
Superintendent Christopher Phillips (left), who is in charge of the 100 Man Police Station in Greater Portmore, St Catherine, and Charroc Construction contractor Raymond Green examine a container that was delivered to the station to be used as an office for domestic violence intervention on Thursday, September 16. 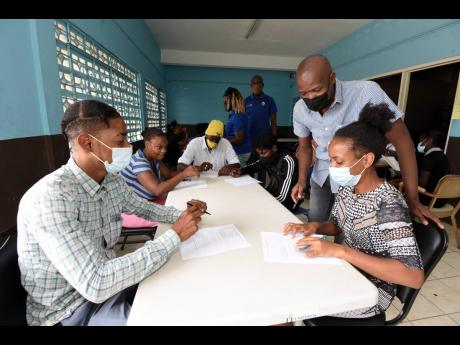 There is a dark side of the Sunshine City that often goes unseen – a side woven by egregious criminals bent on turning the municipality into a bloodfest.

For some 300,000 Jamaicans facing the challenges of COVID-19, the dormitory coastal community of Portmore is home. It is the hub of the troubled St Catherine South Police Division, a melting pot of middle-class and informal settlements surrounded by abject poverty.

Here, once-peaceful communities are slowly morphing into ganglands, their narrow walkways echoing the sound of gunshots, and where informal settlements are dotted with stationary police service units that dare not leave or it would mean bloodshed in a blink.

“Portmore has a serious murder and gang problem. The St Catherine South division so far is at 88 murders since the start of the year, and the majority of those murders are in Portmore,” Superintendent Christopher Phillips, divisional commander, told The Gleaner late last week. “There are at least 16 gangs that we have under investigation currently, and there are some communities where, the minute a police patrol is not in the area, there is a shooting incident.

“In Portmore, there are all several different community hotspots and the gangs’ operations spread into other communities. There is a network between these gangs here. They support each other or form alliances for specific criminal activities. A gang in Central Village, for example, might be connected to a gang in Gregory Park,” explained the top cop, whose jurisdiction stretches beyond Portmore to Old Harbour and Central Village.

This stretch of police responsibility and resources is one of the main reasons for the crime problem, argued People’s National Party Councillor (PNP) Fenley Douglas, who also cited unemployment and inadequate infrastructure as other variables in the crime concoction.

Douglas is the councillor of the troubled Waterford community, which houses several of the crime hotspots identified by sleuths.

“Policing in Portmore and St Catherine will be a challenge because the people-to-police ratio is too wide. There is no way you can have a 100 Man Police Station that is responsible for Portmore but also has the responsibility for Old Harbour, Old Harbour Bay and other jurisdictions outside of Portmore,” said Douglas.

“When 100 Man police was built close to 40 years ago, we were servicing approximately 80,000 people in Portmore and the other areas. Fast-forward to 2021, you have 300,000 people living in Portmore alone, and the other areas in St Catherine are bursting at their seams with housing solutions. Yet the numbers of police have not increased,” he noted.

“The crime problem can be curtailed but the people-to-police ratio is woefully inadequate and I have been calling on the Government for years, not only the JLP (Jamaica Labour Party) but also the PNP [administrations], that if we don’t increase the number of police and cut the St Catherine South Police off Old Harbour, Old Harbour Bay and Central Village, there’s going to be a further set-up for disaster. I shudder for the law-abiding Jamaicans in Portmore,” Douglas added.

Where angels fear to tread

This year’s seizure from their cache of weapons reflects the better part of 40 guns, among them at least one AK-47 rife, a shotgun, an M16 rifle, several revolvers, Glocks, and equally deadly homemade weapons; along with 412 rounds of assorted ammunition. Some 768 persons have thus far been arrested, most gang members. Still, their deeds persist.

Police have managed to stymie all other serious crimes: shootings, rapes, robberies, and break-ins. But there have been 13 more murders this year, compared to the same period last year.

Phillips, who was recently transferred after spending two years in Clarendon – another gang-infested division with 75 murders up to Thursday – agreed that police resources are strained and also part of the challenge in a tightly wound Portmore community. For this reason, he promises more policing targeted at gangs with the help of outside entities – other police formations, churches, school deans and neighbourhood watches in probes and deterrence activities.

“Both (Clarendon and St Catherine South) are tough divisions but, in Portmore and the wider St Catherine South, there is a cluster of gangs operating in a smaller space. There are far more roadways to deal with, far more ins and outs, and, with limited resources, we have to be doing smart deployment of our men on the ground,” explained the divisional head, noting the strain on lawmen deployed in some of the most hostile areas.

Until those are up and running, bikers employed to the E-Commerce National Delivery System (ENDS) providing services during curfews and lockdowns know all too well not to venture into certain hotspots after dark. To some communities, they dare not venture at all, in fear of being robbed or mistaken for rival gunmen using bikes to carry out attacks. Such vigilance has protected the crew from any serious incidents, they told the newspaper in a restaurant parking lot near Braeton two weeks ago.

“Some parts a Gregory Park, Gulf, Trainline; certain sections a Newlands. Dem place deh we nuh go, especially at night-time,” said one among the group of bikers celebrating about 9 p.m after a fruitful day of business on a no-movement day.

“Some parts a Waterford like Boston, Rat Town; some places at Braeton. We don’t too run the risk. Customers dem have to just understand more time. You just have to look outta yuh eye pon the road and ask Jah fi guide yuh,” offered another biker. “Outside of that, I wish the prime minister would lock down the country every day! Most of us struggle and the programme help. Trust me.”

One female taxi operator stationed at the Portmore Mall was equally swift with her list of no-go areas: “Me not going Gregory Park, that is number one. I’m not going through Portmore Lane. I will go through Westchester, but I am not going on Germaine Road to Garveymeade. I will go (Portmore) Pines or Greater Portmore, but me not taking any turn-offs. You just have to have sense on the road,” said the woman, who racked up years of service in the transport sector.

‘People want a change but they are afraid’

On paper, the Bridgeport police area of jurisdiction last week led the tally of homicides recorded this year in Portmore, at 17. The Caymanas police followed with 14; the Waterford police area accounted for 13 murders; Portmore police (100 Man area), 7; and Hellshire, 2. Though its headquarters was miles away in Portmore, the Central Village policing area led the overall division count with 21 murders this year. Old Harbour police has recorded 12 and Old Harbour Bay has had 2 murders on its streets so far in 2021.

If Prime Minister Andrew Holness is serious about plans to ensure Portmore is given parish status soon, weeding out gangsters, their guns and the tit-for-tat murders they commit must be a top priority, the councillors and residents charged last week.

Once-peaceful sections of Greater Portmore, Southborough and Bridgeport are popping up on murder blotters.

Courtney Edwards, a JLP councillor of the Independence City division, which entails parts of Waterford and Portmore Drive, noted the increase in homicides in his area, adding that he has been partnering with citizens to purchase and erect surveillance cameras along some roadways, to deter criminals. This is in tandem with much-needed social outreach initiatives and youth programmes put on by local and international entities.

Twenty-year-old Khanice Jackson, who was kidnapped and killed by a mechanic in March, and 19-year-old Raheima Edwards who, along with Calabar High School coach Nicholas Neufville, was gunned down in an opened lot on Valentine’s Day, were residents of the Independence City division.

“I have three informal communities in my division and I can tell you that there has been an increase in criminal activities, and I think part of the problem is the communication with the police,” said Edwards, reinforcing a point made by Superintendent Phillips.

“In almost all of the incidents, there is somebody who knows what is going on – father, uncle, brother. But the serious factor of repercussions and reprisals are a threat to people. People want a change but they are afraid. The idea of having decent people in the space going about their businesses and then you have unlawful people coming about to disturb that cycle, that is what we want to rid the community of,” he stressed, citing increased employment opportunities as one of the ways of redirecting wayward youths in Portmore.

Edwards did not have an issue with the geography of the St Catherine South Division, but noted that there needs to be increased police and resources in Portmore, and more community policing to build a better relationship with youths who see the lawmen as a threat.