Gunmen on rampage in Granville, Niagara 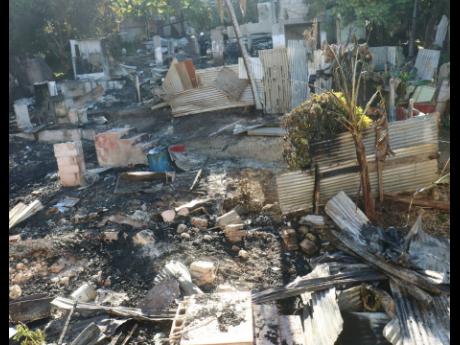 Ashley Anguin/Photographer
The scorched wreckage of three houses that were destroyed by arsonists at Gordon Crescent in Granville, St James, on Sunday morning. 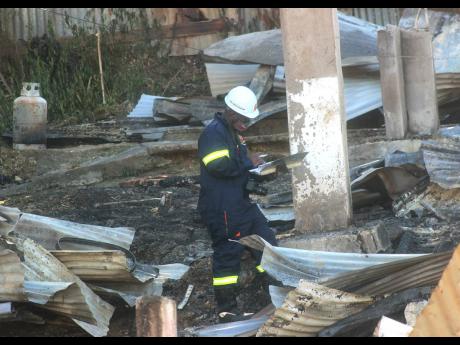 Ashley Anguin/Photographer
A firefighter makes recordings in a logbook at an arson scene in Granville, St James, on Sunday.
1
2

Three persons were shot and killed, one injured, and another burnt to death in his home as gunmen carried out two separate attacks in the St James communities of Granville and Niagara.

In the first incident, Williams and his girlfriend were asleep in their board house about 4:30 a.m. on Saturday when men armed with guns kicked open the door to the house and opened fire, hitting them both.

During a search of the couple’s home, investigators also discovered a loaded .38 revolver under Nick Williams’ pillow.

Residents gathered outside the home of the victims lashed out at the manner in which Lydia died.

Sharee Findlay said that her mother, Lydia, an epileptic, was a kind and loving person.

“My mother trouble with fits, and we were all looking that one day that sickness might have killed her, but nobody was looking for her to be murdered in her sleep by gunmen,” Findlay told The Gleaner.

The other incident took place shortly after 1 a.m. on Sunday. Men armed with high-powered rifles travelled on foot to a family yard at Gunns Drive and opened fire, hitting Brown several times. His house was then burnt to the ground. The fire spread to two other houses, destroying both dwellings and burning Bucknor to death.

While the police were processing the scene, gunshots were heard coming from another section of the community. Another resident was shot in his upper body and rushed to hospital, where he was admitted in critical condition.

Bucknor’s eldest daughter, Nekisha, who said she was inside her home when she heard the barrage of gunshots, got a telephone call that her father’s house was on fire, but she was fearful of venturing outside.

“It sound like a World War Two bruck out inna the community,” Bucknor said.

“When we do get a chance fi come out that time, mi father already burnt to death an’ him house burn down flat.”

Taffeika Blake, Brown’s sister, also shared that her family has been struck with a series of tragedies over the last two years.

A family member died in childbirth in 2019.

“If you follow the crime pattern, it was obviously a well-planned operation,” Chang said of the 1 a.m. attack.

“And although it was designed to take the police off guard, they were very near because they were here in Granville and they responded almost immediately, but at that hour in the morning, with the darkness, and men with high-powered weapons, the police had to be careful how they engaged them.”