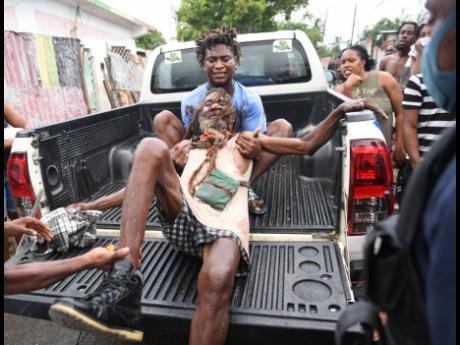 Ricardo Makyn/Chief Photo Editor
Isaac Higgins is placed in a police pickup by an unidentified son. Higgins had been in an hours-long standoff with the police and residents on March Pen Road in Spanish Town on Sunday over a viral video of Jonoi Higgins, another son who is mentally ill, being beaten while chained by the neck to a grille. 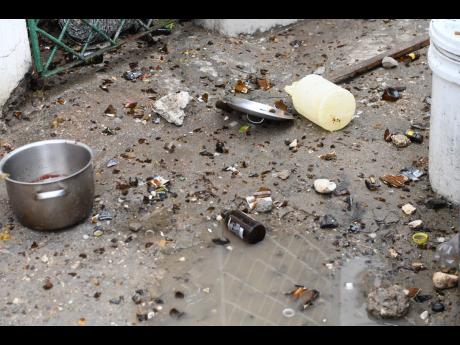 Sunday's dramatic stand-off between the police and an angry crowd, and an enraged 69-year-old man accused of abusing his adult son, serves as a wake-up call that sufficient staffing and other resources must be pumped into mental-health care, a noted psychologist has said.

In a three-and-a-half-hour deadlock, residents sought to hound Isaac Higgins out of his home on March Pen Road, Spanish Town, for allegedly beating his naked 29-year-old son, Jonoi Higgins, with a bat while he was chained by the neck to a grille. The abuse was seen in a video circulated on social media.

Clinical psychologist Dr Orlean Brown Earle said that a lack of resources was the main contributor to tardiness in trained personnel offering outreach, therapy, and medication to persons with signs of mental health, as well as their families.

“Our staffing issue is a major problem,” said Brown Earle. “If you only have a small number of mental-health nurses in the system, there is bound to be a limitation in services, and that is what we are experiencing.”

Brown Earle said that those deficits grow even wider on weekends with no efficient system for the deployment of on-call staff in emergency cases.

“Do we have paid mental-health nurses on call and a local number that residents can call, or the police able to engage a practitioner that is on paid call?” she asked.

A neighbour who claimed he shot the video of the beating told The Gleaner that the younger Higgins had been abused for some time, but noted that the recent incident was the worst he had witnessed.

“I heard the screaming and the beating while I was working in my yard, so I looked over the fence and saw the old man hitting his son with a bat while he had him chained by the neck to the grille,” the neighbour said, adding that he captured it on his phone and posted it on social media in the hope that the authorities would be alerted.

A resident who requested anonymity told The Gleaner that Isaac Higgins had threatened people with his machete for several years.

On Sunday, as the police and residents clamoured for him to come out, Higgins occasionally drew for his machete, and kept the mob at bay by throwing bottles and pelting them with faeces.

After a relentless effort, residents broke the locks of the grille and took him from the house. He sustained injuries to his head and face as some residents inflicted blows on him and cut some of his hair.

The police, who had left the scene after becoming weary of making pleas, returned just in time to save him from the residents.

After a struggle, the police, assisted by residents, handcuffed the elder Higgins and took him away to the delight of the cheering crowd.

The 29-year-old son, who appeared traumatised, was left behind by the cops. Residents believe he should receive professional help.

Brown Earle said that because of the shortage of personnel, community folk should assume greater leadership in protecting mentally challenged persons.

“Mental-health issues don't present themselves until later in life, so family members and caring persons in the communities would have spotted the changes in the person over time,” she said.

She noted that many countries, including Jamaica, were transitioning from centralised medical care to treatment at home.