PNP longing to put lid on season of discontent 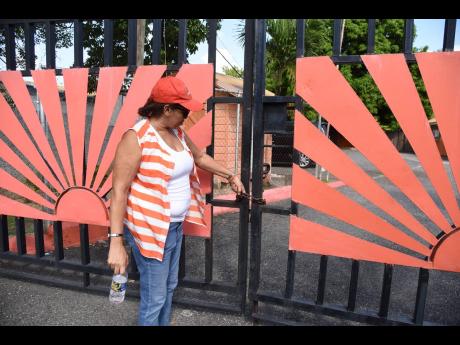 Ian Allen/Photographer
Karen Cross stands outside the chained gates to the Old Hope Road, St Andrew, headquarters of the People’s National Party on September 23 after turning up to lead a protest for a change in leadership of the 83-year-old political movement. She has since been expelled from the party.

Karen Cross’ expulsion from the People’s National Party (PNP) last month comes 67 years after Marxist Richard Hart and three others were booted from the political movement in 1954 for their alleged communist views.

Also expelled with Hart were Frank Hill, Ken Hill and Arthur Henry. Together, they have come to be known as ‘The Four Hs’.

While The Four Hs were given the boot on the grounds of differing political philosophies, Cross and the PNP have been at daggers drawn since she made damning allegations against its general secretary, Dr Dayton Campbell, months ago which has seen her being hauled before the courts.

Cross also led a march on the party’s headquarters on September 23, but only five persons turned up to support her call for new leadership in the 83-year-old party.

Within days, at the conclusion of the party’s executive and officers meeting, her expulsion was announced.

Acting PNP Chairman Horace Dalley admitted that the party’s disciplinary committee did not recommend expulsion, but the executive committee had made the recommendation by a majority vote.

Dalley told The Sunday Gleaner that he could not recall anyone being expelled from the PNP on matters of discipline in more than 40 years, but deferred to former General Secretary Paul Burke, who overhauled the party’s constitution and brought amendments up to date during his tenure.

Burke declined comment on the Cross case, but explained that the executive could carry out disciplinary procedures.

“The executive committee is a subcommittee of the National Executive Council (NEC) and is empowered to execute all matters of discipline. All major decisions of the executive are reported to the NEC, and if there are no objections, it is considered ratified,” Burke explained.

The NEC, he explained, has the authority to amend “any decision of the executive committee”.

“Any member of the NEC can question, seek clarification or even challenge any decision of the executive,” he added.

John Junor, who chairs the PNP’s disciplinary committee, has refuted Cross’ claim of a breach of the party’s constitution following her expulsion.

He pointed out that the disciplinary committee made its recommendations to the executive in July and that the decision had nothing to do with the protests, which brought the party into disrepute.

Junor said that Cross still has the opportunity to issue a notice of appeal, which would be welcomed.

Campbell told The Sunday Gleaner that said the party was not trying to lose members, but rather moving to establish discipline.

“We are not trying to decrease membership. We are establishing party discipline,” he told our news team. “Members are encouraged to use the internal channels, or even seek the counsel of more experienced Comrades.”

Before Cross, Peter Shand, who, in 2020, ran as an independent candidate in St Ann North Western against Dr Dayton Campbell, and the now Jamaica Labour Party member Krystal Lee, who triumphed in the parliamentary contest, were also expelled.

Shand, who was a member of the PNP, was shown the door after running “against the candidate chosen and selected by the party to contest the election”, said Colin Campbell, a former general secretary.

Expulsion, in such cases, is automatic.

Venesha Phillips, councillor for the Papine Division in the Kingston and St Andrew Municipal Corporation and the party’s chairman of the St Andrew Eastern constituency, has also been referred to internal party mechanisms for a pending disciplinary hearing, The Sunday Gleaner was told.

“Her matter is before the internal affairs committee and should go to the disciplinary committee,” Campbell said.

Phillips, however, denies that she has a matter pending.

“I don’t have a case before the committee. I was called by two Comrades to meet to discuss certain things. I did not think it was necessary, so I did not get into any such discussion,” she told The Sunday Gleaner.

Burke pointed out that while squabbles within the movement have been rife and vicious for years, they were mostly rooted in differing philosophies.

Individuals, he said, were more inclined to censor themselves, but today, “issues are amplified by social media and people are uncensored”.

The former general secretary said that Hart’s membership was restored in 2005, and Ken Hill had also rejoined the party and went on to become a councillor and deputy mayor. The party’s leaders, he said, were instrumental in taking control of the issues which threatened to bring the PNP into disrepute.

Matters surrounding the July resignations of the vice presidents Damion Crawford, Dr Wykeham McNeill and Mikael Phillips and Chairman Phillip Paulwell appear to have quieted for now, despite ongoing discord in the party.