No room for LGBTQ+ discrimination in health sector, says Tufton 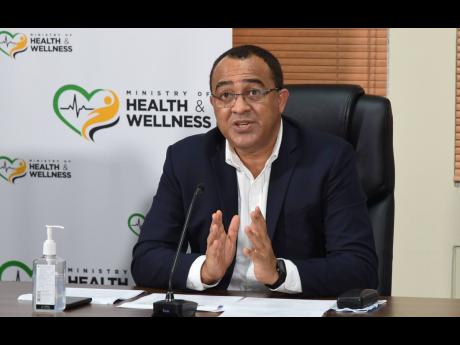 Health and Wellness Minister Dr Christopher Tufton has said that his ministry will not tolerate any form of discrimination against Jamaica’s LGBTQ+ community, noting that gays, lesbians, and transgender people will be treated just like any other citizens when it comes to mental health services.

Tufton gave the assurance on Wednesday while addressing a Gleaner Editors’ Forum looking at issues surrounding access to mental healthcare by LGBTQ+ Jamaicans.

“Mental health services have been experiencing a number of reviews. For the LGBT community, clearly, I do not know what the specific concerns are, but I would say, as a blanket statement, that we promote the concept of non-discrimination in terms of access, and any service that we offer to the population would include all segments of the population,” said Tufton.

“I think the whole issue of the LGBT community and non-discrimination has evolved, and frankly speaking, I think it is getting better,” continued Tufton. “In fact, there is more accessibility and more willingness to provide service without any prompting or punitive oversight measures.”

The health minister said that he was open to looking at what further steps could be taken to continue to discourage discrimination against any group of Jamaicans, including LGBTQ+ persons, from a policy perspective.

Tufton was responding to a recommendation from Glenroy Murray, the interim director of the Equality for All Foundation Jamaica, that the health ministry could issue specific advisories for the LGBT community to know where they can access non-discriminatory mental health services.

“We appreciate that the Ministry of Health and Wellness provides services to all, but I raise the point that LGBT persons do not always know where is safe for them to go. The notion is that, perhaps, specific messaging to the community might be useful so that more persons feel that they can access services,” said Murray.

The audit also revealed that 21 per cent of surveyed LGBT members believed that they had received their needed support all or most of the time, compared to nine per cent who did not feel so fulfilled.

Murray charged that public-sector healthcare providers had a duty to provide care to all persons, including the LGBT community, regardless of their personal opinions or biases

“There is a higher level of responsibility among public sector workers to provide services to everyone regardless of their own individual beliefs about the people who come in front of them,” said Murray.