US cools rhetoric on Ja-China ties 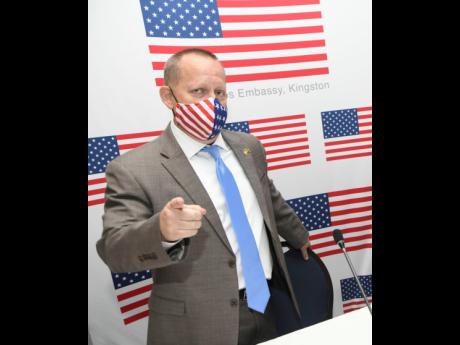 Rudolph Brown/Photographer
John Mcintyre, chargé d’affaires of the United States Embassy, gestures during a roundtable discussion at The Jamaica Pegasus hotel on Tuesday.

Chargé d’affaires at the United States Embassy in Kingston, John McIntyre, has seemingly broken from the isolationist rhetoric of former ambassador Donald Tapia, insisting that China’s deepening relations with Jamaica will not sour the island’s ties with Washington.

In fact, McIntyre said that there was no “redline” on China’s investment policy in the country – part of its broader Belt and Road Initiative – a noticeable retreat from Tapia’s hawkish policy narrative.

Tapia also asked the Government to consider the position it would take in the event of a US-China trade war.

“The Government of Jamaica is free to make decisions about whomever they wish to speak with on any matter … . There is no redline, as far as I’m aware, in terms of our policy on dealing with China,” McIntyre said during Tuesday’s roundtable talk with journalists at The Jamaica Pegasus hotel in New Kingston.

His comments coincide with the attempts by US President Joseph Biden to reset relations with China during a virtual summit with his Chinese counterpart Xi Jinping on Monday.

Since Biden’s assumption of the presidency in January, Washington and Beijing have had frosty relations, with trade, military deployment, and Taiwan’s independence among several sources of discontentment.

McIntyre said, however, that his Government will raise concerns where it sees that there are unfair or unethical dealings.

He said also that Washington held the same view of Jamaica’s and its cybersecurity partnership with Israel.

In February, The Gleaner reported that the Jamaican Government, after months of silence, had disclosed that it signed a five-year J$4-billion contract with Israeli firm ELTA Systems Limited.

The disclosure came two months after a report by a technology website based in Israel revealed that ELTA’s servers were breached by Iranian-linked hackers.

McIntyre said while the US will offer its expertise on cybersecurity, it took no issue with an Israeli partnership.

“If they want to work with the Israelis, that’s their business,” he said.