US Embassy says no secret quotas on visa approvals 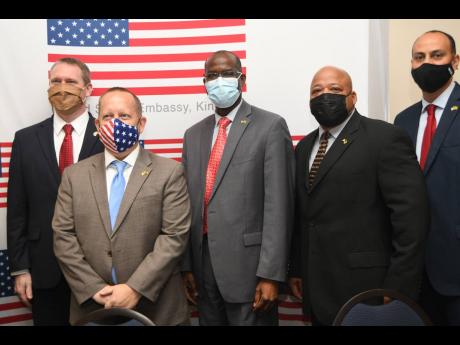 A steady increase in the rejection rate of non-immigrant visa applications in the B category since 2016 has given rise to concerns about the transparency of the process, but the United States Embassy in Kingston has said it operates within the remit of Washington’s laws.

Chargé d’Affaires John McIntyre insisted that while the embassy avoids commenting on specific visa application rejections, consular officials do not disqualify Jamaican applicants because of quotas.

“It’s not a scam. It’s not like the movie. It’s not who you can call that you know that you can do something,” McIntyre asserted on Tuesday during a roundtable talk with journalists at The Jamaica Pegasus hotel in New Kingston.

“We follow the rules and regulations, so no matter what anybody says publicly or privately, that’s the way it works.”

A review of the US State Department’s statistics shows that five years ago, 94,458 visas were granted and 35.64 per cent of applications were denied.

Some 19,090 fewer visas were granted in 2018, with 46,187 applicants receiving approval, but more than half of Jamaicans who applied for visas in the category were denied. The refusal rate for that year was 54.46 per cent.

McIntyre said that consular staff had his stamp of approval in how they have processed applications, even as complaints soar on social media about the unavailability of timely interview dates. The next available date, on Tuesday afternoon, is 596 days from now – in July 2023.

McIntyre insisted that staff have worked beyond the call of duty to process applications during the coronavirus pandemic.

“The sorts of comments that are made are just not true,” he said.

Consul General Scott Feeken doubled down on McIntyre’s position, noting that the Kingston embassy has a “very good” record of processing visas in a “fair and open manner”.

He said while it is unfortunate that there are those who don’t qualify, many are successful.

Meanwhile, he conceded that the ongoing pandemic has resulted in lengthy wait times for the processing of non-immigrant visas but said that this was not unique to Jamaica.

Feeken said while the country has made progress in fighting COVID-19, there is more to be done.

At the same time, he urged Jamaicans to get vaccinated, reiterating that entry into the US is otherwise impossible.

The consul general said in the coming months, the embassy will be increasing the number of immigrant and non-immigrant appointments offered.

“As a result, we expect that backlogs and wait times will improve,” he said, cautioning, however, that it would take months to revert to pre-pandemic service levels.