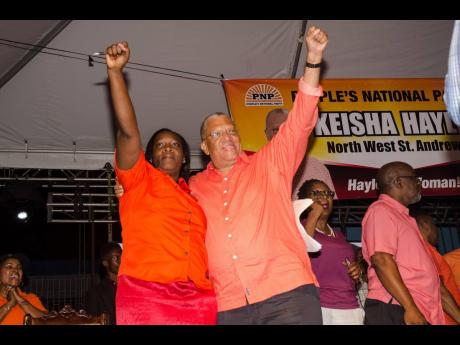 Padmore Primary School principal Keisha Hayle has returned to the political fold of the Opposition People’s National Party (PNP) and is set to contest the Red Hills division in the upcoming local government elections due in three months.

In a Gleaner interview last Wednesday, Hayle disclosed that 80 per cent of respondents in a Don Anderson poll commissioned by the party said that they would support her bid for councillor.

The educator said she has spent more than 40 years in the division, which is part of the St Andrew West Rural constituency and fancies her chances of claiming victory in political territory the Jamaica Labour Party (JLP) won by 220 votes five years ago.

“It’s the people who have asked for me because they know what I’m about. I’ve had many opportunities to leave Jamaica, but I’ve stayed because of the people,” Hayle said.

Her latest campaign for political office follows her defeat in the March 2018 by-election to the JLP’s Dr Nigel Clarke, the now finance and public service minister.

Turmoil brought on by infighting in the Opposition party, which has struggled to regain the electorate’s confidence following its shock defeat in the 2016 general election, caused the educator to walk away from her role as caretaker.

Last Wednesday, she said things had changed for the better.

“The PNP is back in good hands,” she said of her decision to head back into the political throng.

Hayle had publicly slammed then PNP President Dr Peter Phillips over the party’s decision to not contest the Clarendon South Eastern by-election in March 2020.

She called Phillips a weak leader then.

Mark Golding’s election as Phillips’ successor has inspired confidence in Hayle, who had supported Peter Bunting’s failed bid to unseat Phillips in the summer of 2019.

Golding is a close ally of Bunting.

Hayle, in the Gleaner interview, praised the current president of the 83-year-old party, calling him energetic and warm.

“So I’m willing to fall in line to ensure that we carry home Red Hills,” she said, adding that her presence in the community dated back to her school-age years.

Hayle said for more than two decades, she has contributed to development there, teaching for more than a decade and serving as principal for as many years.

She said that she has also spearheaded multiple charitable initiatives, the most recent being her Superwoman programme that saw her providing care packages for seniors.

This, she said, formed part of her COVID-19 relief effort.

“This was out of sheer love for the people. I’m very patriotic and I love my country. The people know me and know what I stand for.

“Good people must step in. People who love people and want the best for them must step in,” said Hayle.

“We must put up ourselves to be candidates. If we don’t do that, what we’ll have is some shady people coming in who don’t really mean Jamaica any good,” she added.