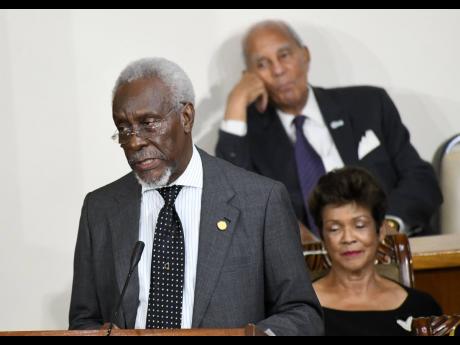 Senior statesman and former head of government, P.J. Patterson, has issued an impassioned plea to Prime Minister (PM) Andrew Holness and Opposition Leader Mark Golding to transcend partisan borders and capture a historic landmark by relinquishing the monarchy and establishing a republic when the country celebrates its Diamond Jubilee next August.

In a letter to Holness and Golding dated December 2, Patterson said it would be repulsive to contemplate the 60th anniversary of Independence where Jamaica’s Constitution rests on an Order in Council dating back to July 23, 1962.

He also bemoaned still having a head of state “who does not reflect our own image and enables every Jamaican to aspire in reaching the highest position within our native land”.

On Tuesday, Barbados ditched the final vestige of colonialism by becoming a republic and swore in its first president, the 72-year-old veteran jurist, Dame Sandra Mason.

Patterson asserted that the Jamaican Constitution, which stipulates that “the Executive Authority of Jamaica is vested in Her Majesty”, was the first to be crafted when the ill-fated Federation of the West Indies collapsed in 1961.

“We cannot allow ourselves to be the last to sever our colonial vestiges. The time is long due to seek yonder horizon during the year of our Diamond Jubilee.

“This plea is submitted for your gracious consideration to reflect our oneness and ignite hope for this and succeeding generations,” said Patterson, who holds the record in Jamaica for serving three terms as prime minister.

He reminded both men that before Jamaica entered its 40th year of Independence, the country had been actively engaged in extensive consultations on moving towards a republican system.

Patterson observed that both the Jamaica Labour Party and the People’s National Party have repeatedly accepted the institution of an indigenous president as head of state, a position reflected in the election manifestos of both political parties since 2002.

Further, he said that successive prime ministers have reiterated that firm intention at their inaugural installations and reaffirmed their policy positions in numerous Throne speeches from the dawn of the millennium.

Based on the work and reports of previous commissions and parliamentary committees, the single outstanding issue is whether the new president should be chosen by a two-thirds membership of both Houses sitting separately or jointly.

“One early Vale Royal meeting between you both could easily settle that,” said Patterson.