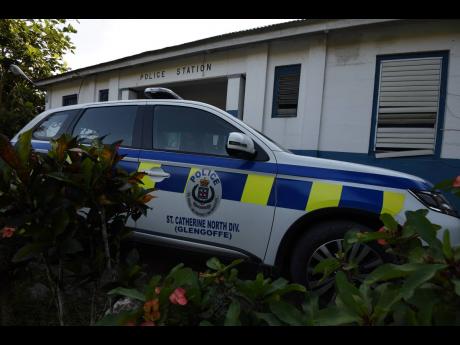 Ian Allen/Photographer
The Glengoffe Police Station in St Catherine has been described as a health and safety hazard.

Weeks before the heights of the Christmas shopping season, thieves in the rural northern St Catherine region of Glengoffe are already targeting small business operators on Main Street and other districts like Cassava River and Big Road. Just last...

Weeks before the heights of the Christmas shopping season, thieves in the rural northern St Catherine region of Glengoffe are already targeting small business operators on Main Street and other districts like Cassava River and Big Road.

Just last Wednesday, the local police station reported having apprehended one of the several alleged perpetrators who have been tormenting business owners.

Residents are angry at the streak of burglaries that have hit shops in November.

But the spike is not an unusual occurrence, says Howard Hunter, president of the Community Development Committee (CDC) in Glengoffe.

The thieves are reported to commonly take food, cash, and electronics.

Sandra Gowe, who has been operating her grocery store for more than 16 years, said Friday that she has had to ramp up security arrangements, which have been costly.

So far, she has had to install grilles at the entrance and shopfront windows, as well as use at least three padlocks. She has also had to keep on exterior lights at night to deter trespassers.

She has also had to pay for frequent bush clearing in order to safeguard her property.

“They tried to dig off my front door ... with a crowbar,” Gowe told The Gleaner, adding that several neighbouring shop owners have suffered a worse fate than hers.

At least one shop was burgled twice in November, she said.

“Them nuh have enough police a the police station,” said Hunter.

The CDC president said that the station should be manned by at least 15 officers, but, according to cops who spoke with The Gleaner, only eight cops are currently rostered, because two are on pre-retirement leave and one is at home recovering from on-duty injuries.

“The truth is, they can’t provide station guard plus patrol every night,” Hunter said, adding that the station has only one service vehicle.

The Glengoffe Police Station has been condemned by Spanish Town Mayor as a health hazard and not fit for the rearing of fowls.

Gowe believes that Glengoffe’s employment crisis, which has worsened during the coronavirus pandemic, has decimated household revenues, causing young people to turn to crime.

Theodore West, a tailor in the community, agrees that many youths do not see a route out of poverty, except for crime.

West said he wants to expand operations and have a larger space equipped with more sewing machines to school apprentices.

Gowe is appealing for government officials to spawn job and training opportunities in Glengoffe.

“It is hard, I am a mother and a grandmother and I know it is hard,” she said, citing agriculture as one of several outlets for income generation.

“[But] farming takes cash to begin and it take a little while. We have it all here, but there is no assistance.”