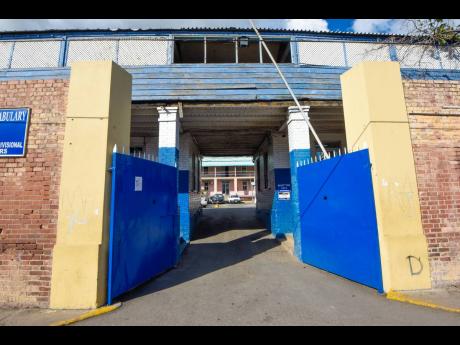 Nicholas Nunes/Photographer
The Kingston Central compound where 27-year-old Orville Purnell, a Jamaican wanted in St Lucia, reportedly walked out of a lock-up with police complicity on December 1.

Five days after a Gleaner report on a corruption probe into police complicity in the escape of a fugitive at the Kingston Central lock-up and a series of questionable jailbreaks islandwide, the High Command revealed on Tuesday that 11 personnel across junior and senior ranks have been interdicted.

More interdictions loom as a high-level investigation launched by the Inspectorate and Professional Standards Oversight Bureau (IPROB) progresses, a well-placed source had said.

In a statement issued on Tuesday, the Jamaica Constabulary Force (JCF) reported that it noted with great concern recent incidents in which detainees escaped from police lock-ups.

The action comes in the wake of a disclosure, by a high-ranking officer, in The Gleaner’s December 2 edition that 27-year-old Orville Purnell, who is wanted in St Lucia on murder and other charges, simply “walked out” of jail.

On Tuesday, the JCF says a parallel criminal investigation into the Purnell ghost disappearance has commenced. That probe involves “the aid of technology”, the force said.

Three members who were on duty on the day the Jamaican fugitive escaped from Kingston Central police lock-up have been placed on interdiction.

Purnell was due to face an extradition hearing on December 6 and absconded from police custody on December 1.

Additionally, eight other police personnel have been placed on interdiction in relation to two other cases of escape that occurred in 2021. The JCF did not specify those jailbreaks, but there have also been breaches at the Port Royal, Hunts Bay, and Freeport lock-ups.

At least eight detainees are still on the run having escaped from the four lock-ups.

In the Freeport, Montego Bay, jailbreak, $5 million was reportedly paid for the release of two detainees, The Gleaner understands.

“You notice yuh nuh hear nothing else ‘bout it. Police dem nah get paid so they are willing to collect. The money share and as a young police, you will get share out and yuh just haffi keep yuh mouth,” a police source told this newspaper.

On Tuesday, the Jamaica Observer reported that Purnell had offered $3 million to help him escape the Kingston Central lock-up and had boasted of having a “golden key to freedom”, while gifting his possessions to other inmates.

The jailbreaks and corruption allegations present major embarrassment to Police Commissioner Antony Anderson, a retired major general who once led the army.

The JCF has long been dogged by a reputation for corruption and has low levels of public trust, opinion polls have shown.

Anderson warned, in Tuesday’s statement, that while due process will be observed, the recent escapes of detainees would have repercussions.

“Let me make it abundantly clear to the public, and to the men and women I lead, that this is a matter of accountability that I take very seriously.

“When people, through negligence or unprofessionalism, cause the name of the JCF to be tarnished, there must be consequences,” he said.

Assistant Commissioner of Police McArthur Sutherland, who heads IPROB, could not be reached, as calls to his cell phone went unanswered.