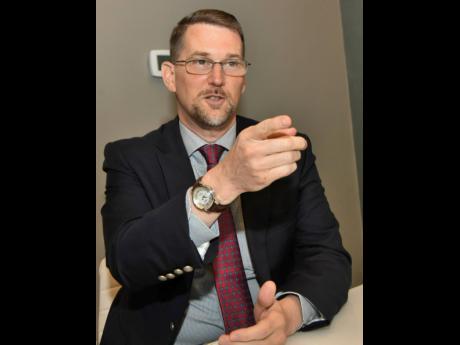 Rudolph Brown/Photographer
Mark Wells, US deputy assistant secretary for Caribbean affairs and Haiti, says Washington is committed to halting the flow of illegal guns and drugs into Jamaica.

The Biden administration has pledged more support in curbing the smuggling of guns from Haiti into Jamaica amid a sharp increase in murders here.

Mark Wells, the United States deputy assistant secretary for Caribbean affairs and Haiti at the Bureau of Western Hemisphere Affairs, has also acknowledged America’s complicity in Jamaica’s crime dilemma, with America’s addiction to narcotics and other drugs helping to fuel the crisis.

Wells, who is in the island for bilateral engagements, said that one of the main premises of the Biden administration is that democracy must deliver security and other fundamental benefits for people.

“We’ve made our own investments in that area, but we also recognise that things like our drug use create problems for other countries and we have a shared responsibility to help countries address those problems.

“We have a very strong international cooperation with Jamaica on attacking transnational criminal organisations. We also recognise that there are significant internal security issues in Jamaica, and what we try to do in that sense is to help with building up institutions,” Wells said during a Gleaner interview on Friday at the AC Marriott Hotel in New Kingston.

Washington will continue offering assistance, said Wells, to the Jamaica Constabulary Force, the Office of the Director of Public Prosecutions, the Major Organised Crime and Anti-Corruption Agency, and the judiciary.

There have been high-value drug interceptions along Jamaica’s coastline in recent times, but illegal gun inflows to the island have significantly outpaced seizures, with an estimated 2,400 weapons smuggled in annually. With 626 gun seizures reported in 2020, that represents just over a quarter of illegal inflows.

Concerns have also been raised about increased drug trafficking in the region, Wells disclosed, with Haiti and the Dominican Republic featuring prominently.

Acknowledging the thriving guns-for-drugs trade between Haiti and Jamaica, Wells said that the Jamaican Government has asked for assistance in dismantling the well-organised criminal activity valued at millions of dollars.

Jamaica’s porous borders – with more than 140 informal ports of entry – offer a sieve to gunrunners and drug traffickers. That scourge has caused murders – which stood at 1,332 up to November 30 – to spiral by more than 10 per cent, year-on-year.

All other major crimes were down.

“Some of those guns come directly from the United States. Others are trafficked by criminals themselves. The ones coming from Haiti are examples of that. We recognise that we have to do more in Haiti,” Wells, whose portfolio covers the country, said.

Approximately 71 per cent of illegally traded guns have their source in the US.

Wells told The Gleaner that the US continues to work with the Haitian government and its law-enforcement agencies “to try to stem those flows”.

This week, the US State Department is expected to lead a conversation among the international community to discuss collective issues being faced and how assistance can be given to Haiti.