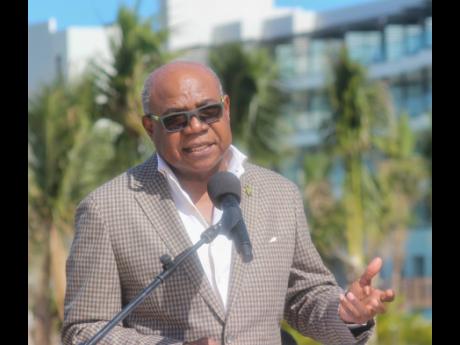 Tourism Minister Edmund Bartlett has cautioned against overplaying the scale of infection of the Omicron variant of the coronavirus, a day after the health ministry advised that the fast-spreading strain was likely in the population.

Bartlett warned that the handling of news about the emerging variant could jeopardise Jamaica’s recovering tourism industry which was decimated in 2020 when travel restrictions brought much global travel to a halt.

Citing the lag in vaccination in much of the world - including Jamaica, where less than 20 per cent of the population is fully inoculated - the tourism minister emphasised that mutations were part of the new norm of a global reality.

He said that the United States’ Centers for Disease Control and Prevention (CDC) Level Two travel advisory rating could be compromised if the market got the impression that the new variant was widespread here. The US is the island’s largest source market.

Health and Wellness Minister Dr Christopher Tufton disclosed in a hastily convened press conference on Wednesday that a returning traveller to the United Kingdom who had been on a short stay at a Jamaican resort had tested positive for the variant.

“Yes, we must be transparent. But we also must be mindful of how critical the stability and the balance that is required is and that we’re walking a tightrope,” said Bartlett at Thursday’s ribbon-cutting ceremony officially opening 84 new rooms and suites at Sandals Royal Caribbean in Montego Bay on Thursday.

“I make the point that, when we make certain comments, sometimes unintended consequences can be damaging, because you know if America hears tonight that Jamaica now has Omicron, that level could change.”

Some 80,000 jobs have returned to the tourism sector during the pandemic, and while the country’s inflows lag pre-2020 numbers by 49 per cent, Bartlett credited the management of the Resilient Corridor, Jamaica’s tourism bubble.

The award-winning corridor, which includes stretches of both the north and south coasts, boasts a COVID-19 positivity rate of 0.6 per cent since the country reopened its borders in June 2020.

However, a record-high number of 76 imported cases recorded in a 36-hour period serves a grim warning, Tufton had said on Wednesday.

Jamaica has stabilised its COVID-19 management after a deadly third wave broke out in the summer, forcing the Government to impose multi-day lockdowns to stem the spread.

As at Wednesday, the country reported 53 new cases for an overall total of 92,279 infections. There have been 2,461 related deaths.