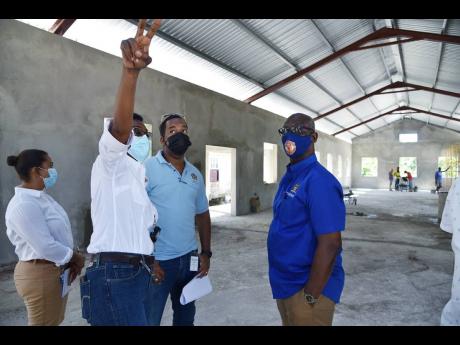 Herbert McKenis photo
Ava Murdock (second left), superintendent for the Roads and Works department at the Westmoreland Municipal Corporation summoned the attention of Wray Nelson (second right), structural engineer in the Ministry of Local Government and Rural Development, and portfolio minister Desmond McKenzie during a tour of the construction of the male ward of the Savanna-la-Mar Infirmary on January 21.

Minister of Local Government and Rural Development Desmond McKenzie has announced the deployment of additional technical support to the Westmoreland Municipal Corporation (WMC), on the basis that it is performing at an unacceptable pace in the delivery of timely service to the people of the parish.

The minister has assigned two technical officers from the ministry to the Bertel Moore-led WMC to help advance projects across the parish.

McKenzie’s comments came on Thursday while touring the Savanna-la-Mar Infirmary and the designated site where a fruit and vegetable market is to be constructed in Negril.

Both projects were approved and should have started in 2017, but five years later, there is still no clear indication of the completion date for the infirmary.

“We will be looking at the entire structure of Westmoreland, in terms of the technical output of the municipal corporation and to see where we can assist in strengthening the organisation, and put them in a better position to be able to deliver service and to deliver on time,” McKenzie said.

In 2017, the ministry provided $42 million to the WMC to build a new male ward and a matrons’ quarters at the infirmary.

While not disclosing a new timeline for the completion, McKenzie is pushing for the project to be satisfactorily completed to allow for the male residents, who are now housed in a dilapidated building, to be relocated.

“The work is progressing. I am just hoping that they will stick to the deadline for the completion of the project,” he stated.

Up to Thursday, the building plan for the construction of the market had not yet been approved by the WMC. Further, the notices to have vendors and other small businesses relocated to facilitate the construction were not served.

Asked to comment on the technical shake-up, Bertel Moore, who chairs the WMC, said he welcomes the additional technical support because his planning department was operating on a skeleton staff as a result of resignations and transfer to other corporations, among other things.

“In our planning department, we are short-staffed. We had written to the Service Commission more than once, trying to upgrade the planning department and they have not given us the OK to employ other persons,” Moore said in a Gleaner interview Friday.

“We have two building officers, we could do well with four,” he pleaded while divulging that two persons from the planning department recently resigned.