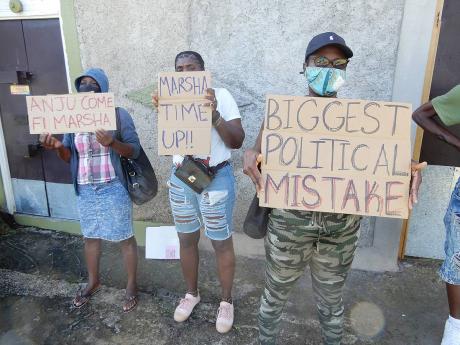 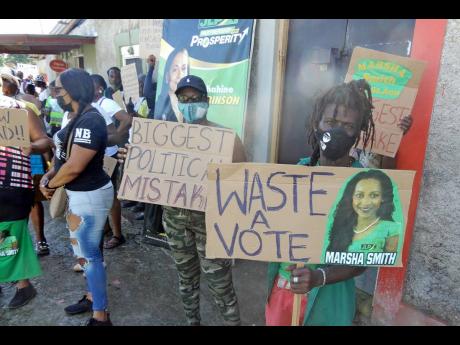 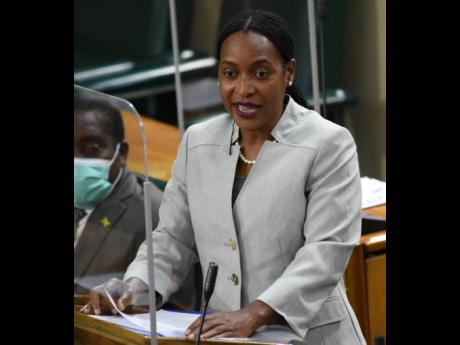 Placard-bearing supporters of the ruling Jamaica Labour Party (JLP) in St Ann North Eastern protested against incumbent Member of Parliament Marsha Smith on Thursday, calling for their party’s leader, Prime Minister Andrew Holness, to remove her as their representative.

The placards were many and had messages such as “Biggest political mistake”, “Waste a vote”, “Marsha a stop prosperity”, “Anju come fi Marsha”, “If Marsha deh bout wi nah vote”, and “Why yuh dweet Brogad?”

Smith, who is also state minister in the Ministry of Finance and the Public Service, could not be reached for comments, but the JLP said that it would meet with supporters over the issue.

The angry constituents contend that it was Holness who pushed Smith to be the JLP constituency representative for the September 2020 general election to succeed Shahine Robinson, who died in May that year.

Charging that she has not been seen in the constituency and is ineffective as an MP, several dozen upset party supporters gathered at the constituency office in St Ann’s Bay yesterday morning as they sang, chanted, and trampled upon T-shirts bearing Smith’s image, calling for her removal.

“We are upset because we’re not getting any proper representation from our member of parliament. Nine thousand people-plus voted for this lady, and I can tell you she doesn’t know 100 of the 9,000-plus by name or by face. This lady, she don’t come to the office any more to talk to people; she don’t move through the constituency,” Clement Alexander, JLP campaign chairman for St Ann North Eastern, complained.

He said that unlike other female JLP MPs, including Krystal Lee in St Ann North Western, Tova Hamilton in Trelawny Northern, Rhoda Crawford in Manchester Central, and Juliet Holness in St Andrew East Rural, who are visible and working, Smith is hardly seen in the constituency.

“From she came in a year and a half ago, we haven’t seen what she [has] done ... . There’s no project that we can point to that she has done,” Alexander said, suggesting that there was also a rift between Smith and the councillors in the constituency.

He said the supporters were not seeking to disrespect the party or the prime minister, but “enough is enough”.

Melody Rhoden said that she also had not seen much of Smith since the general election.

“We are fed up; we have [had] enough of a lack of representation in North Eastern St Ann from Ms Smith as the member of parliament,” Rhoden said. “From Marsha win, we cannot see Marsha Smith. She’s invisible, meaning there is no representation.”

A protester, who did not give her name, placed the blame squarely at the feet of the prime minister.

Even before Smith contested the polls, there had been rumblings after the JLP hierarchy parachuted her into the vacancy left by Robinson against the wishes of several party supporters.

Just two months after the election, there had already been whispers that protests were being planned.

The fact that Smith delivered the biggest margin of victory to the JLP – even more than the popular Robinson – was of little or no consequence to the peeved supporters.

Supporters contend, however, that the victory was based on the groundwork laid by Robinson over the near two decades that she was their standard-bearer, buoyed by Holness’ popularity.