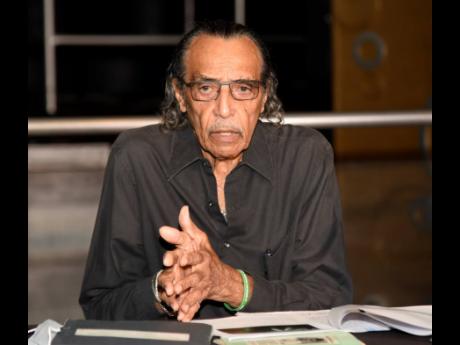 Nicholas Nunes/Photographer
Richard Crawford, president of the GGPAJ, addresses journalists at a press conference at Market Place in St Andrew. He called for greater inclusion of small farmers in the medicinal marijuana industry.

The Ganja Growers and Producers Association Jamaica (GGPAJ) has called for an immediate two-year incentive programme for marijuana cultivators, especially for small, traditional, Rastafarian and indigenous farmers, many of whom have been excluded from the Cannabis Licensing Authority (CLA)-regulated industry.

It proposed an implementation window over the next 60 days.

Richard Crawford, president of the GGPAJ, made the call on Thursday for the intervention of the Ministry of Industry, Investment and Commerce as ganja growers celebrated the seventh anniversary of the approval of the Dangerous Drugs Amendment Act, which decriminalised the use of certain amounts of the plant as well as set new rules for the commercialisation of medicinal marijuana.

Crawford urged the “cannabis task force” to take the association’s recommendation to portfolio minister Aubyn Hill and called for access to incentives or low-interest loans for agro or small-business production.

The GGPAJ president said that the 2015 passage of legislation had spurred “enthusiastic expectation for an inclusive ganja industry to be built from the ground up”, but that sentiment has given way to a sense of betrayal.

“The stringent and overwhelming bureaucratic 2016 Interim Regulations, intended to have been reviewed after two years, were not, and have built an industry predominantly of big players, all of whom are welcomed, and a number of them being members of the Ganja Growers and Producers Association,” he said at a press conference Thursday at the Market Place in St Andrew.

“And as we have repeatedly declared, that, whether so designed or not, wittingly or unwittingly, is socially, morally, culturally and economically wrong that those persons constituting the small and traditional ganja cultivators, a number of them being of the Rastafarian faith, who were hounded, beaten, prosecuted, arrested, convicted, criminalised for growing ganja and laying the basis of the Jamaican ganja industry, are being left behind.”

He reiterated GGPAJ proposals that were submitted to the Economic Inclusion Committee of the Cannabis Industry Development Task Force in August 2021.

The recommendations included the establishment a two-year Special Cultivation Amnesty and a more inclusionary licensing regime. The lobby wants a national register for all applicants, nominal permit fees, the limiting of acreage and number of plants, and allowance for sales to licensed cultivators, processors, retail outlets and for research and development. The GGPAJ has also advocated for the expansion of local sales under CLA supervision to a new category registered local retailers.

“Where are we today due to no amendments in six years to what was then a progressive piece of legislation in April 2015? Today is a prohibitive and restrictive policy document, still operating under the negative nomenclature of the Dangerous Drugs Act; no amendments to the bureaucratic and overreaching compliance regulations; the failure to establish a Cannabis Industry Stakeholders Council; a failed Alternative Development Programme,” said Crawford.

Among the unfinished business, said Crawford, was the long-awaited transitional permit, export regulations, and health ministry classification and treatment of cannabis-derived products.

“We are not in a blame game, but the facts are that the present Government, in particular, the parliamentary Opposition and, indeed, Parliament must all take responsibility for continuing the industry in this over-regulated and draconian manner, which is stifling the very essence of a local ganja industry,” he said.

“We came to the conclusion and stated bodily at the time, we have all failed, even some of our people weren’t happy with that, but the truth is the truth,” Crawford continued.

February 24 marked the seventh anniversary of the Dangerous Drugs Amendment Act being approved by the House of Representatives, having been earlier approved by the Senate 18 days earlier.