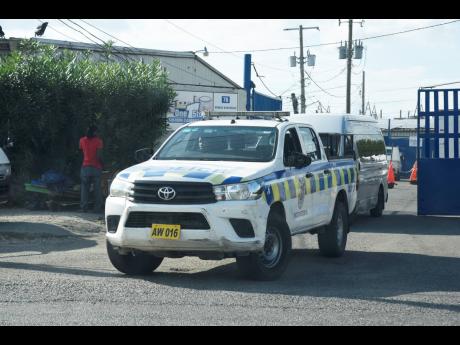 Nicholas Nunes/Photographer
Police leaving One-Stop Customs Clearance Centre on Industrial Terrace on March 4, 2022 where there was a large gun find.

The Counter-Terrorism and Organised Crime Investigation Branch (C-TOC) yesterday made another dent in the shipment of illegal firearms after 21 guns including three rifles were seized at a warehouse inside the One Stop Customs Clearance Centre in Kingston.

Late yesterday evening, C-TOC listed Jadian Edwards of 3 East Greater Portmore in St Catherine as a person of interest in the gun find. The police believe that the woman may be of assistance in their investigation and as such have asked Edwards to turn herself in to the police by noon today.

The cache reportedly comprised of 18 pistols, three rifles and an assortment of more than 1,000 rounds of ammunition.

The near four-hour operation ended approximately 4:00 p.m. and The Gleaner saw scene of crime personnel in a convoy of police service vehicles exiting the premises located on Industrial Terrace in Kingston.

The guns were reportedly found in two barrels shipped from Florida for an intended address in Clarendon.

Prime Minister Andrew Holness said recently that the Jamaica Customs Agency (JCA) was formally brought into the ‘Get Every Illegal Gun’ campaign, to strengthen the efforts against the illicit importation of guns through the country’s ports.

“We are going to [ensure] that no illegal guns come through our legal ports. It is now time that we get tough on the internal collaborators and facilitators who are allowing illegal guns to come into our country. They get rich from it, while the poor people in the country die from it,” Holness said at the ground-breaking ceremony for a new Stony Hill Police Station in St Andrew last week.

The One Stop Customs Clearance Centre is usually busy, especially during the festive period. However, activities yesterday afternoon was reduced to a crawl and not much was happening.

An employee at the establishment told The Gleaner that business has been slow.

A driver who is often at the location soliciting business to transport barrels said he was on hand when news broke of the find.

He told The Gleaner, “Mi nuh know what do dem man ya enuh. Dem just a mash up the country wid di gun ting. Things like dat only slow up work. All today (yesterday) a just little work gwaan, nothing much,” he said on condition of anonymity.

Yesterday’s seizure is the second gun bust since the start of the week.

On Monday two persons were arrested following an operation at a warehouse on Sea Grape Way in Montego Bay, St James.

Seven firearms, including two rifles and a sub-machine gun, were seized in that incident.

It is reported that about 2:30 p.m., a joint team consisting of members of the Contraband Enforcement Team and the police were making checks at the facility.

The guns were discovered during an inspection of electronic items.

Commissioner of Police Major General Antony Anderson during a press conference at his office on Tuesday said 163 weapons were seized since the start of the year, an overall 37 per cent increase when compared to the similar period in 2021.

The police say that organised criminals are purchasing these high-powered weapons so that they can terrorise communities, particularly the poorer and more vulnerable areas.

“Let me make it clear that the high-powered rifles that we have seized are not cheap. They are not tools of economic development or productivity. They are high-value weapons normally associated with warfare rather than crime,” added Anderson.

The police say their probe into yesterday’s seizure is ongoing.