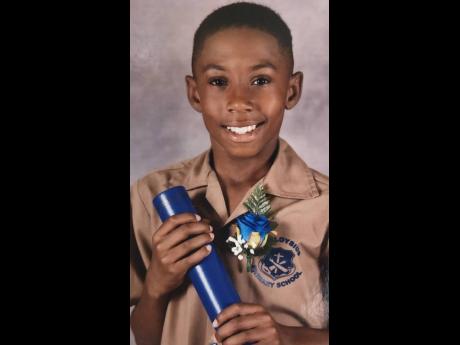 Shock and sadness overwhelmed the Rae Town, Kingston home of 12-year-old Holy Trinity High School student Karuki Moncrieffe yesterday, a day after he collapsed in his community and was later pronounced dead at the Bustamante Children's Hospital...

Shock and sadness overwhelmed the Rae Town, Kingston home of 12-year-old Holy Trinity High School student Karuki Moncrieffe yesterday, a day after he collapsed in his community and was later pronounced dead at the Bustamante Children's Hospital.

His mother, Juliet Irving, was beside herself with grief when The Gleaner visited the William Street family home yesterday.

She said that Karuki, who was asthmatic, was wheezing when she took him to the Kingston Public Hospital (KPH) on Wednesday morning some time after 6 a.m.

He was discharged in the afternoon after undergoing some tests and X-rays.

Irving said that after leaving the hospital just before midday, she sent Karuki home and went to work.

The few hours spent together that morning are etched in her memory as the last time she saw her son alive.

“Me and him did stop in a store I always buy clothes. The lady was like weh him a come from back a mi, and mi say, 'Up a hospital', and mi just go put him pon a taxi. Him did want mi put him pon the taxi long time and me a say to him, 'No bother rush',” the grieving mom recalled.

Irving said that Karuki went home and later engaged in his favourite past time: playing football.

Some time after the game, he was reportedly found unresponsive.

“The young man that see him say him see him drop down outside there. Him a say a go him go buy something, and him a say, 'Karuki, get up', and him see that him can't get up. Him lift him up and put him in the car and carry him weh,” Irving said.

Then she got a phone call that shattered her world.

Irving told The Gleaner that she rushed to the KPH, thinking that it was where her son had been taken, but was later told to go to Bustamante Children's Hospital, where she was informed that Karuki had been pronounced dead.

Up to the time she spoke with The Gleaner yesterday, the devastated Irving had not yet notified Holy Trinity High of the passing of the seventh-grader as she was taking some time to come to terms with the tragedy.

Irving describes Karuki as a bright lad, who was efficient in technology and had a knack for fixing devices.

“The phone and tablet, him brilliant dem way deh. Him have technique. If I don't know anything about my phone, a him I have to call and him just do it. Him show mi what to do,” Irving said.

She added that Karuki, who was being assisted in his learning development by a set of university students, had performed well in online classes and she was looking forward to him continuing along that path with the resumption of face-to-face classes.

Irving said that her 20-year-old, the second-to-last child, has been finding it hard to cope.

“The one that him follow almost mash up the things in my house. I have to just hold on to him, hug him up and have him on the ground, pamper him,” she said.

Twelve-year-old Kalilah Gowe, Karuki's niece who is commonly regarded as his twin because of their interaction, was also mourning.

“Mi miss everything bout him,” she said, noting that their birthdays were only a month apart.