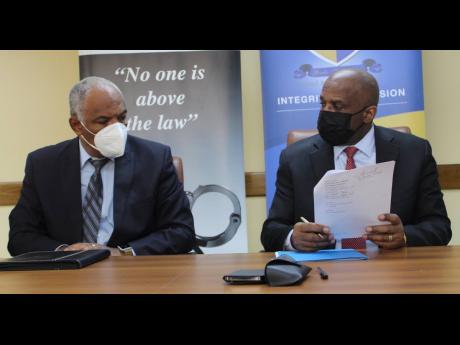 Contributed
Colonel Desmond Edwards, director general of the Major Organized Crime and Anti-Corruption Agency (MOCA), and Integrity Commission Executive Director Greg Christie in dialogue during the signing of a memorandum of understanding to increase corporation between the anti-corruption investigative bodies at MOCA’s Oxford Road offices in New Kingston yesterday.

The fight against corruption and financial crimes has been strengthened with the Major Organized Crime and Anti-Corruption Agency (MOCA) and the Integrity Commission yesterday signing a pact to solidify the investigative and collaborative partnership between the two entities.

The memorandum of understanding (MOU) is geared towards strengthening the national response to instances of corruption and financial crimes in government ministries, agencies and companies.

Christie said that the agreement was a welcome development in the commission’s ongoing strategic efforts to effectively discharge its anti-corruption mandates under the law.

“Unbridled corruption is a pre-eminent threat to our country. It constitutes a clear and present danger to good governance, national security and sustainable economic growth,” he said.

The Integrity Commission boss charged that if corruption was allowed to expand or roam unimpeded it would not only obstruct Jamaica and Jamaicans from attaining their full socio-economic potential, but it would also infiltrate major state institutions, ultimately undermining and weakening their effectiveness, and threatening the very existence and legitimacy of the state itself.

“It takes strong and independent institutions, with an unshakable commitment to serve only the public interest, to confront and overcome the scourge of corruption and abuse of office, and to ensure accountability on the part of those who administer the affairs of the state,” Christie added.

For his part, Edwards said the MOU “establishes a common understanding of the roles and responsibilities of MOCA and the Integrity Commission with regard to information sharing, casework assistance, referrals of cases, joint operations and investigations. It also increases our capacity building by strengthening our collaborative relationship”.

He said that the MOU will allow for greater collaboration and sharing of information where necessary in the course of an investigation.

“The provision for joint and parallel investigations will allow both entities to utilise the expertise and capabilities of each agency, which can only lead to stronger tactics against crime,” Edwards said.