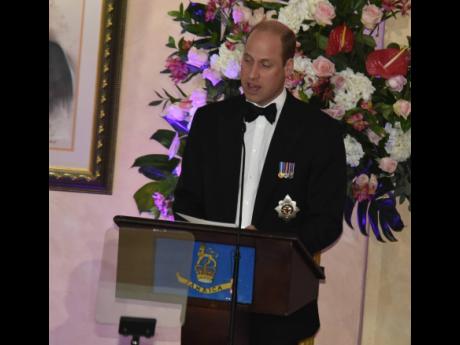 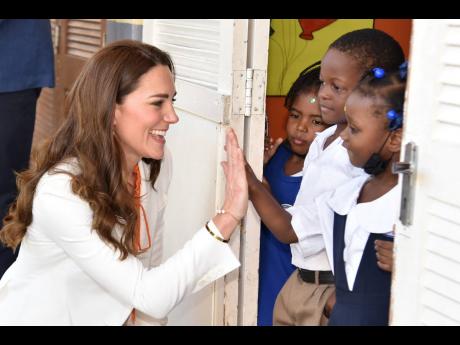 Kenyon Hemans/Photographer
Kate, Duchess of Cambridge, high-fives a student as her classmates look on at Shortwood Practising Primary and Infant School on Wednesday. The Duke and Duchess are due to depart the island today.
1
2

Chastened by public protests against Britain’s role in the transatlantic slave trade and centuries of colonial exploitation, Prince William expressed regret Wednesday night on the Jamaica leg of a Caribbean tour for the atrocities of the black holocaust.

The sentiments were made amid growing calls for Jamaica and other non-republican independent Caribbean nations to sever ties with The Queen, who remains the titular head of state.

“I want to express my profound sorrow. Slavery was abhorrent and it should never have happened,” the Duke of Cambridge said in a state dinner address at King’s House.

“I strongly agree with my father, The Prince of Wales, who said in Barbados last year that the appalling atrocity of slavery forever stains our history,” said the Duke of Cambridge.

“While the pain runs deep, Jamaica continues to forge its future with determination, courage and fortitude,” added the second-in-line to the throne, who acknowledged the role of Jamaicans in rebuilding the United Kingdom following the devastation of World War II.

But Jamaica’s leading voice for reparation, Professor Verene Shepherd, said the statement was nothing new and did not go beyond what past British leaders have said.

“I’m sure he (William) got instructions – ‘Please don’t say ‘apology’, don’t use that word, because you’re going to commit the British state to reparation’,” said Shepherd, who was a panellist on Television Jamaica’s ‘All Angles’ current affairs programme Wednesday night.

Meanwhile, Antigua and Barbuda’s Prime Minister Gaston Browne says Jamaica has taken a step in the right direction by signalling its intent to part ways with the British monarch, even as the Duke and Duchess of Cambridge are in the island to mark Queen Elizabeth II’s 70-year reign.

In fact, in an interview with The Gleaner late Wednesday, Browne said cutting ties with The Queen is an aspiration of all independent Caribbean countries.

“By so doing, we’ll be literally closing that circle of independence. We have individuals who can serve as presidents of our respective countries, and I believe that each country within the Commonwealth Caribbean all aspire to become a republic,” Browne said.

His comment follows Prime Minister Andrew Holness’ declaration to Prince William and Kate early Wednesday that the country will be moving to drop The Queen as head of state.

The royal couple is in the country on a three-day visit that ends today. The trip forms part of a royal Caribbean tour in celebration of The Queen’s Platinum Jubilee.

But with the legacy of the British Empire and slavery in the region still fresh in the minds of Caribbean peoples and growing pressure to shed colonialism’s vestiges, some pundits have questioned whether the tour is a last-hurrah charm offensive to gauge the Crown’s appeal.

Holness, in a brief conversation with the Duke and Duchess of Cambridge during a courtesy call at Jamaica House, said their presence provided an opportunity to deal with unresolved issues that needed to be addressed “front and centre”.

“Jamaica is, as you would see, a country that is very proud of our history, very proud of what we have achieved, and we’re moving on. We intend to attain, in short order, our development goals and fulfil our true ambitions as an independent, developed, prosperous country,” Holness said during a photo opportunity with the royals.

Successive administrations have for decades signalled their intent to do away with the British monarch, but those pronouncements have proven to be a talk shop, with no concrete steps towards disengagement.

In his contribution to the Budget Debate last Wednesday, the prime minister told Parliament that he will be naming an advisory committee to examine the issue of Jamaica becoming a republic.

Browne said his government is also looking to remove The Queen as head of state in the twin-island Eastern Caribbean state.

However, he said that the parliamentary Opposition “continues to play politics” on the matter.

Entrenched clauses within the country’s constitution require opposition consensus before amendments can be made.

“When they are in government, they will suggest that the best thing for us to do is to have a republic than to have The Queen as head of state. But when they find themselves in opposition, and the Government seeks to proceed to effect it, then they vote against it,” Browne said.

“They continue to play these partisan games that would undermine the process and to undermine a decision that they themselves would support if they were in government. That is the nature of our politics, very parochial.”

Meanwhile, Browne declined to comment on the royal couple’s tour of the Caribbean, though he telegraphed disapproval.

“I have my own thoughts on that, but I do not wish to make any controversial statements at this time,” he told The Gleaner.

Prince William and Kate faced anti-colonial protests in Belize, where they kicked off their tour on March 19. That continued in Jamaica - in Kingston on Tuesday and St James on Wednesday - where scores of demonstrators called for an apology for the atrocities of slavery and demanded reparation.

The couple is expected to travel to The Bahamas where, already, that nation’s National Reparations Committee is demanding a formal apology from the Crown for its role in slavery.

The call came in an open letter, published on Tuesday, with the committee pressing for an acknowledgement of slavery and for reparation to be paid.

The Jamaican Government, too, has lobbied for reparation.