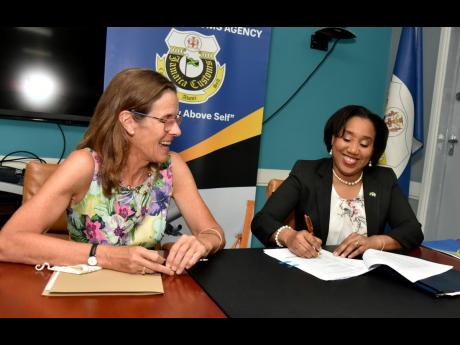 The acquisition of a new intelligence management system by the Jamaica Customs Agency (JCA) is expected to significantly boost its surveillance of criminal masterminds in the illicit drugs and firearms trade following close to 1,300 busts within the past three years.

Since 2019, the agency said that it has intercepted 496 attempts to smuggle cocaine, seizing 436.13 kilograms with a combined street value of $743.6 million.

Within that time, there were 748 marijuana seizures with a combined weight of 8,291.51lb and an estimated street value of $41.4 million.

The JCA told The Gleaner that there were 55 instances of firearms and ammunition seizures, which yielded 119 guns, 129 magazines, and 7,994 assorted rounds of ammo.

The intelligence management system, which is being funded through a $22-million grant from the British government through its Border Force arm, is expected to augment operations at Customs by boosting its surveillance risk-based targeting capabilities, critical to tackling crossborder crimes.

Commissioner of Customs Velma Ricketts Walker said the new system is the JCA’s declaration of “war” against criminals, many of whom she said are Jamaicans domiciled overseas, determined to use the agency for nefarious activities.

“The idea here is for us to pull on the treasure trove of data we have stored in our customs management system, ASYCUDA, combine that with other data sources, and provide a more complete picture as it relates to suspected bad actors, their associates, and associations,” Ricketts Walker said during the signing of a memorandum of understanding on Tuesday at the JCA’s head office in Kingston.

“Big data is a tool we intend to exploit to the fullest in our pursuit of criminals and those wishing to do harm to Jamaica and its people. Know that the Jamaica Customs Agency will not relent,” she added.

The Customs CEO said that the system is being implemented to facilitate legitimate trade, putting the agency in a position to better target illicit activities and players.

Data from the system are expected to flag patterns of criminals who, she said, have their own intelligence, and are well coordinated.

He said the bulk of information currently being stored on Customs’ ASYCUDA system is, by itself, useless unless manually manipulated.

“We are now seeking to properly manipulate the system through the use of an intelligence database. The Government collects data at various points with the approval of respective government organisations. We want to pull that in so that we can paint a more complete picture if we are looking at a suspect or a target organisation or even a business entity,” he said.

Nicely said the pooling together of information accessed through state agencies will show, for instance, persons’ history with Customs, their tax history, and their arrival and departure history through the Passport, Immigration and Citizenship Agency.

“That now is a very powerful tool in the hands of law enforcement,” he said.

Complicity among Customs personnel in criminal activities has been flagged, but Ricketts Walker has said that the agency does not have any record of that scourge.

“But we continue to ensure that we are making and putting forward the necessary protection in the system to mitigate that,” she said.

Furthermore, the commissioner said all employees, including her, are subjected to a polygraph testing as part of the agency’s vetting process.

The JCA, The Gleaner has learnt, has also obtained a licence for an advanced security technology called iDetect, which is expected to further improve screening to “ensure that our integrity is of a high standard within the agency”.