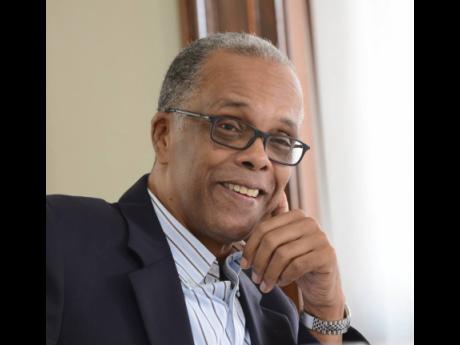 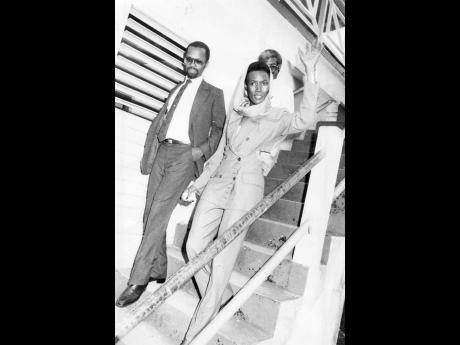 File
File Actress-singer Grace Jones waives to the crowd after leaving the Stony Hill Resident Magistrate’s Court, where she appeared on cocaine charges in April 1989. Beside her is Dr Paul Ashley, one of the attorneys representing Jones, who was acquitted of the charges. 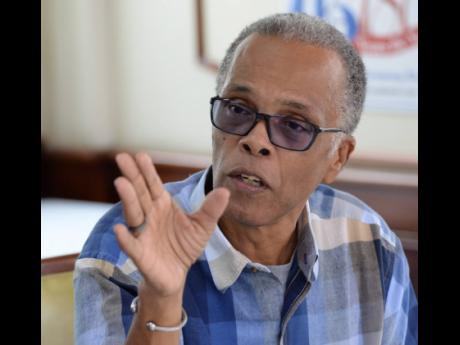 File
File Dr Paul Ashley at a Gleaner Editors’ Forum in 2016. He said the Gleaner forums remain the most stimulating discourse he has since university.
1
2
3

He has stoked many a political fire, throwing stones at Old Hope and Belmont roads, the headquarters of the two major political parties, and has swum upstream against popular tides, challenging the status quo at all levels.

The fearless and brave Dr Paul Wilton Ashley has never shied away from political commentary and he is not about to stop.

His biggest peeve is not being pictured among the 11 students from the Central Branch All-Age School representing the national motto, ‘Out of Many, One People’, on the reverse of $2 note, which was in circulation between 1969 and 1994. The image made a return in 2012 on the Jamaica 50 commemorative banknotes consisting of five denominations – $5,000, $1,000, $500, $100, and the $50 note – some of which are still in circulation.

The young Ashley missed out on being captured in the iconic 1962 image as he refused to be photographed without parental consent.

“Me so fool-fool. I said, ‘I am not taking any picture because I don’t know what it was about’. To this day, me still vex,” he pouted before bursting into laughter in an interview with The Sunday Gleaner last week.

He chose Jamaica College (JC) upon leaving primary school, even though all the boys his age and older in and around his Vineyard Town community were attending Kingston College or St George’s College.

He recalled asking which high school was better than those two and was told Jamaica College.

“So I said, ‘Why I go to Kingston College or St George’s College when I can go to Jamaica College?’ That time, I didn’t even know where Jamaica College was,” he recalled.

His father, a colonial policeman, took him to school once – and only once.

Ashley described going to JC as “going to a foreign white institution”, but it was there that his mercurial nature began to take shape as he railed against the injustices meted to the have-nots.

“At that time, dunce rich white boys used to go home at lunchtime and change cars and come back to school,” he said with disdain.

He told the story of two brilliant boys getting 104 per cent and 106 per cent, respectively, for an examination in which he scored 96 per cent of the 100 marks. The headmaster said he found “a shortcut” to inflate the marks.

He was also among boys who protested when the two pupils were to “become prefects just because they were bright”.

Among the old boys who were part of the crew of firebrands was Jerry ‘Jah Jerry’ Small, who was reportedly instrumental in having Emperor Haile Selassie I drive through the school on his visit to Jamaica.

He gave details of the students taking strike action when “an imported headmaster” wanted to put everyone below sixth form in short pants, tall socks and brown shoes.

“That was never going to happen,” Ashley said.

Weighing in on the current impasse at the school, he recalled how a now-deceased white headmaster remonstrated at a parent-teacher meeting that, “It is being said that JC has gone to the dogs. That is not true. It is that the dogs have started coming to JC.

“I said, ‘Ruff! Ruff!’ because it was clear that people like me was one of the dogs.”

Ashley left JC long before Michael Manley’s free education policy – which he believes should be reintroduced – opened the school to the have-nots and his horizon would become more enlarged and radical at The University of the West Indies.

At The UWI, he recalled two famous lecturers who “lectured to themselves”, adding that there were also several “little gods” who were more interested in getting government consultancies than pouring into the students.

“There was a strong umbilical linkage, mostly to the People’s National Party (PNP),” he said.

When Manley introduced free education at all levels, Ashley made use of every opportunity as his father’s pension “could not buy a quart of ice cream or enough toilet paper for the month”.

His dad, Ashley said, had to take a job as “a glorified security guard at Monymusk and Frome sugar factories”, and he received a scholarship via that association.

He added that The Gleaner’s Editors’ Forums remain the most stimulating discourse he has since university.

In August 1981, Ashley married Opal Bent, one of his former students.

Months later, he left for a short “elitist” course in The Hague, with plans to return to Jamaica before his first anniversary.

Less than an hour after arriving in London, he received news that his wife was found dead in their Beverly Hills home.

Without a bath, he recalled brushing his teeth, before rushing back to Jamaica.

He declined to share more details publicly out of respect for her relatives.

“The day after a funeral is the worst day in anyone’s life. I had to make quick decisions. I went through the grisly task of returning wedding presents given months before. After that, I returned to The Hague to complete the programme. On my return, I decided to study law, which I still consider one of the relics of colonialism,” he said.

Ashley’s second wife, attorney-at-law Daille Nation, read the details of the case as a little girl and knew about Ashley before meeting him.

Their son, Sean-Paul, went to Campion College then to Deerfield, Princeton and Harvard for his doctorate, all on scholarship.

“He lost big time on a whole heap of US dollars. I challenged him to beat my record at finishing his doctorate. I got mine at age 27. He is 30 and not finished,” Ashley said with both pride and arrogance.

Ashley once told former Chief Justice Lensley Wolfe that “he didn’t know what he was doing” during a class, and left a Dorcas White Remedy examination an hour and a half early, but received one of two As in that class. The other went to Hugh Wildman, who Ashley described as “a born prosecutor”.

“I knew every past paper. I knew the answer to every question. I could tell which questions were coming and if you are spending 45 minutes on one question, you didn’t know what you were doing,” he said.

While he received many prizes in his law studies, he was not employed by the leading firms in Jamaica and it was Queen’s Counsel Frank Phipps who accepted his application for internship. Among his more famous cases was defending Grace Jones in 1989 on cocaine charges, along with now Senate President Thomas Tavares-Finson.

Along with Tavares-Finson, he again defended Gregory Isaacs as he faced cocaine charges and teamed up on appeal for Albertine Barrett, who was accused of plotting the murder of her husband, famous Wailers drummer Carlton Barrett.

Least known about Ashley is his photographic prowess and his impressive canvas and sculpture collections.

The official photographer at Carifesta (Caribbean Festival of Arts) in Jamaica in 1976, he was also the wedding photographer for some notable Jamaicans.

His famous ‘Legacy’ piece showed the passage of political leadership from P.J. Patterson to Portia Simpson Miller and Andrew Holness.

Another piece showed two boats, one painted bright yellow and another in a range of pastel colours, most notable light green. Both boats are held together by a chain link. He sees the future of Jamaica chained to the two political parties and there is no escape.

In the wide-ranging six-hour interview with The Sunday Gleaner, Ashley charged that Tivoli Gardens was no longer “the mother of all garrisons”, but the grandmother who has sent out her grandchildren to plant evil seeds across the land, noting the number of criminal dens islandwide.

He believes the real truth of the 2010 Tivoli Gardens operation to capture the now-convicted drug and gunrunner Christopher ‘Dudus’ Coke remains to be told, adding that the 2014-15 commission of enquiry into the events was merely a show to appease a frightened nation.

Turning to more recent phenomena, Ashley believes the recently announced PNP tour of the diaspora is not to say hello, but to solicit funds as Jamaicans residing overseas have been key backers of political parties.

He warned leaders to tread carefully as many expatriates seeking political alignments are charlatans and the parties could find themselves being funded by international criminals, just as they could also be bankrolled by equally corrupt locals.

Ashley believes Jamaican politics will continue to fail to attract some of the island’s best minds as it is a serious financial exercise. He contended that the people who have been honest in politics end up “broke like hell”.

Despite this, he does not believe parliamentarians should be paid more since they all placed their hat in the ring knowing of the remuneration, no one really entered for the salary.

He expressed regret that there was no binding philosophy in the current politics and the exercise is now one of opportunity even as he acknowledged that every administration which took Jamaica out of a crisis was voted out.