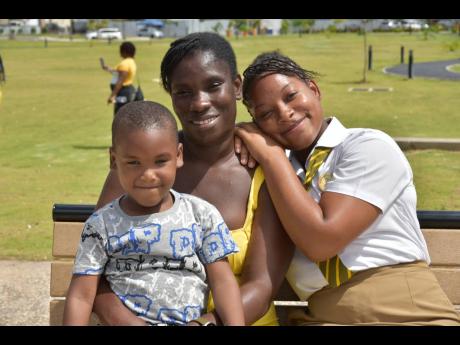 The result of the pregnancy test was like a death sentence for Otisa Wilmoth.

A few weeks from her 15th birthday, she confirmed her greatest fear. And not only would she be facing a judgemental community and disappointed relatives, but a heartbroken mother, who constantly lectured her on the importance of abstinence.

The disgrace and feeling of abandonment that came with making such a poor decision were overwhelming.

“A horrible feeling,” the now 20-year-old Green Pond High School sixth-form student recalls. “I was so ashamed, it was like my world had ended, and all I could think about was to end my life.”

“My mother never said it, but she was open about the mistakes that she had made and I knew that she was depending on me to do something positive with my life,” she told The Sunday Gleaner. “I was the one she sent to stay with relatives so that I could focus on my schooling, so I knew she had hopes of me coming good.”

The news of Otisa’s pregnancy could not have come at a worse time for her mother, Vanisha Brooks, who was struggling to provide for her other three children.

“I felt ashamed like I failed her as a mother, and my accommodation was inadequate for someone in that condition, but everyone was refusing to have anything to do with her, so it was a lot of frustration, panic, and tears,” Brooks recounts. “But I could not abandon her, because I also made the same mistake as a child … I just did not want her going through the same thing.”

Brooks remembers being just in time to stop a suicide attempt by Otisa, which forced her to seek the advice of the police, who referred her to the Child Development Agency (CDA).

Otisa did not want the 19-year-old father of her unborn child to get in trouble with the law. “He would be jailed for a decision we both took and our child would be suffering today, that is the reality,” she told The Sunday Gleaner.

“He was shocked when I told him, and abortion was one of the considerations but we decided against that and he has stood behind his child.”

The setback served as a reality check for Otisa, who, after giving birth, was reintegrated into the school system.

“I no longer see poverty the same way again,” she said. “It is my responsibility to fight my way out of poverty through education, and no one could do it for me, but me.”

She added, “I have a life to answer to, and a mother to put a smile on her face because she had my back through these difficult times. Despite me letting her down, she never gave up on me.”

Studying at nights while her baby slept, or creating audio recordings of her notes to listen to while she performed household duties became the norm.

“I would go home as early as I could and revise all my notes I got that day, and along with all my other obligations, I was studying or revising something,” she said.

The dedication and hard work earned Otisa seven subjects at the Caribbean Secondary Education Certificate (CSEC) level, with grade one in English A, mathematics, information technology, human and social biology, biology, and physics; and grade two in chemistry.

Along with her mother, Otisa credits the support system at Green Pond High School, which has since renamed its achievement board in her honour.

“Being pregnant in school was a very difficult experience,” she said. “It comes with discrimination and emotional abuse, which causes low self-esteem. I became the subject of ridicule and the topic of failure but I drew inspiration from my son and I decided that I am going to turn a new chapter and fight for my success.”

Otisa has set her sights on becoming a cardiovascular surgeon, her dream job from her younger years.

“I am just in love with the idea of saving lives and I am fascinated with all aspects of the heart and the circulatory system, and there are not many people in that field so that is my dream,” she said.

Otisa has started applying for scholarships and is eyeing overseas summer work programmes to help fund the next chapter on her journey to achieve her goals.

“I would welcome any form of support from corporate Jamaica,” she said. “I am hard working, I know what my targets are and I am ready to put in the hard work to achieve my goals.”

She added, “My advice to teenage girls is that being a child mother is an emotionally and physically draining task. Be intimate with your books, listen to your parents, and stay away from sexual activities.”