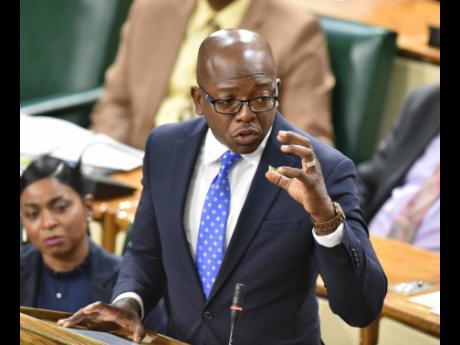 Kenyon Hemans/Photographer
St Thomas Eastern Member of Parliament Dr Michelle Charles looks on as her brother, Pearnel Charles Jr, the minister of agriculture and fisheries, makes his contribution to the Sectoral Debate in Gordon House Tuesday.

The Government is moving to address the misuse and overuse of fertilisers which has been having an adverse effect on crop production.

Minister of Agriculture and Fisheries Pearnel Charles Jr said the administration is collaborating with the main fertiliser manufacturer to guide research for the development of new blends that will maximise efficiency and slash costs for farmers.

Charles made the disclosure to Parliament on Tuesday during his contribution to the Sectoral Debate.

The minister said that the Rural Agricultural Development Authority and the Agro-Invest Corporation would anchor the campaign to help farmers adopt best practices in the use of fertiliser.

“Right now our farmers, sadly, are utilising sometimes the wrong fertiliser and sometimes too much fertiliser. It is causing burning of our soil and it is constricting our productivity,” Charles told lawmakers.

He said the ministry would also looking to ramp up its production of commercial-grade organic fertiliser by way of composting and other household material.

“It is our goal to reduce the dependency on the synthetic fertilisers. It is very important for us to use, but we want to use it well and use it efficiently. We are using local materials because it has been proven to promote greater yields of agricultural crops and also healthier soil structure,” the minister said.

In March, the largely unregulated use of chemicals in agriculture was tagged as a main cause of public-health dangers like cancer.

The charge was made at the launch of a study on the pattern and use of agricultural pesticides and their residues in the Jamaican environment.

Liz Solms, of the Coalition of Concerned Citizens, slammed commercial cultivation practices that have put a premium on high yields over traditional methods such as crop rotation.

That demand has since fuelled high dependency on artificial fertiliser, pesticides, and herbicides, charged Solms, who migrated to Jamaica 17 years ago and operates an organic farm on 30 acres of land.

“The end result is that the farmer and the land are hooked, much like a drug addiction,” said Solms in a speech delivered on her behalf by Jason Henzell, chairman of Jakes Hotel Villas and Spa in Treasure Beach, St Elizabeth.

“Behind all the hard work and the beauty, the agricultural landscape across Jamaica can, in fact, be viewed in terms of a major public-health issue. The farmer is put in danger by his or her unregulated usage and proximity to agricultural chemicals, many banned elsewhere in the world.”

Cancer has been a fault line of dispute between farm workers and global agrichemical giant Montsanto, which has been hit by an avalanche of lawsuits that has forced its parent company, Bayer, to set aside billions of dollars for litigation.