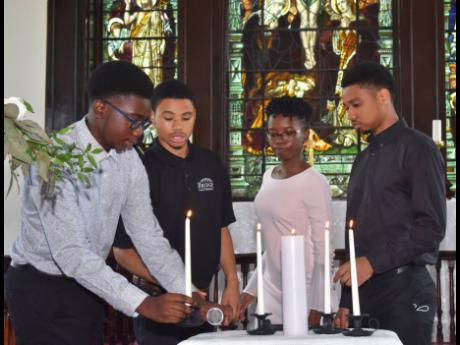 Ashley Anguin
Credited as a champion of social and economic causes, the four young warriors – Christopher and David Donaldson, Aysha-Simone and Kyle Anthony Brown – each lit a candle, closing an era that saw their grandfather, former Mayor of Montego Bay, Cecil Donaldson, fighting for beach access for the citizens of St James, tourism development in Montego Bay and Negril, employment creation and advocating for dignified conditions for market vendors. 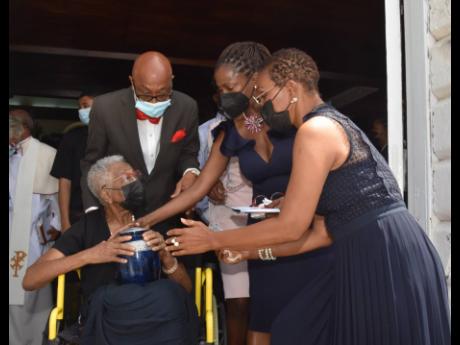 Ashley Anguin
Laura Donaldson holds the urn with the ashes of her late husband, Cecil Donaldson. Assisting her is Fitzroy Donaldson (nephew), Marsha-Ann Donaldson (daughter) and Donna Donaldson (niece), as they depart the thanksgiving service for the life of the former Mayor of Montego Bay at the St James Parish Church yesterday.
1
2

Powered by the feats of their nationalist grandfather, the late Cecil Hugh Donaldson, four of his grandchildren committed to carrying on his legacy as torchbearers during a thanksgiving service at the St James Parish Church yesterday afternoon.

Credited as a champion of social and economic causes, the four young warriors – Christopher and David Donaldson, Aysha-Simone and Kyle Anthony Brown – each lit a candle, closing an era that saw their grandfather fighting for beach access for the citizens of St James, tourism development in Montego Bay and Negril, employment creation and advocating for dignified conditions for market vendors.

Donaldson, whose name is engraved on the front of the St James Municipal Corporation building, served twice as mayor of Montego Bay (1966-1969 and 1975-1981).

His daughter Marsha-Ann, who urged the audience to clap so she wouldn’t cry, spoke about a man of purpose, passion, prosperity, boldness, bravery, fearless, fair, family man, visionary, maverick, radical, activist, advocate and a nationalist at heart.

The only daughter of the late mayor, Marsha-Ann, said they promised to carry her father’s torch not simply on his deeds, but as a promise to continue to uphold the values, integrity, conviction, and compassion that were the foundation of the difference he made to Montego Bay and Jamaica.

“We will keep the torch burning in our choice to make even a fraction of a difference you have made,” was the commitment she gave.

Donaldson fathered three boys and one girl with his wife Laura.

“Cecil Donaldson spoke the language of the masses and his voice constantly reverberated on their behalf in the halls of power, echoing their dreams, their triumphs, their disappointments, and their cries for social and economic justice,” were the words coming from Patterson.

He lauded Donaldson as a community organiser par excellence, ardent trade unionist, and progressive politician, who figured prominently in the history of the emergence and development of western Jamaica.

Donaldson was mayor when Montego Bay gained city status in 1980 and is credited as a visionary for having played a pivotal role in that historic development.

And this fact was not lost on Golding, who spoke of how the late former mayor passionately pursued local government reform, and in keeping with its progressive political agenda, he always ensured that the people were the centre of policymaking.

Words such as firebrand “father of Montego Bay” were used in the celebration of the life of the man who led the Ministry of Local Government to bring legislation to Parliament, which granted city status to Montego Bay.

As his wife, children, grandchildren, nieces, nephews, other relatives and friends savoured the richness of the tributes depicting the giant of a man who earned a name that became synonymous with the fight for progressive causes, Custos Pitkin’s surrogate said his contribution towards nation will never be forgotten.

For him, Jamaica has lost an outstanding patriot in Donaldson, whose high standard of professionalism, and ethical conduct, will remain a testimony of his life and the many lives he has touched.

When it came to the St James Municipal Corporation’s tribute all were at attention, because as much as Councillor Mark McGann wore a different colour from Donaldson and served another political party, the admiration and respect were evident in his voice.

He spoke of Donaldson as not just a man for all seasons, but someone who could be described as a man well ahead of his time.

“His death is a great loss to this nation and, in particular, local government,” said McGann.

Past mayors in attendance at the funeral included Shalman Scott, Homer Davis (now minister of state in the Office of the Prime Minister), Glendon Harris and his son Noel Donaldson, who served years after his father.