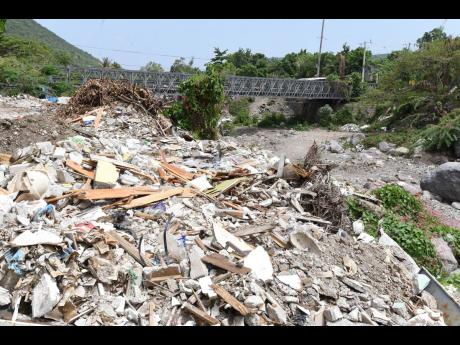 Ian Allen/Photographer
Sections of the Hope River are heavily mined for sand, while mounds of garbage are being dumped in the riverbed. The bridge in the background links the communities of Tavern, Kintyre, and Hope Flats. 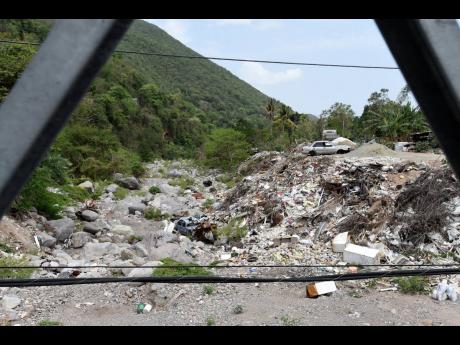 Ian Allen/Photographer
A view of the garbage that is narrowing the path of the Hope River in the vicinity of the Kintyre Bridge.
1
2

As the Atlantic hurricane season nears, householders of Kintyre in Kingston 6 have heightened fears that their homes, precariously sited along the banks of the Hope River, may be washed downstream in the event of torrential rainfall.

That concern has been compounded by reports of growing numbers of unmarked trucks dumping garbage in the river’s path, including debris from demolished buildings, out-of-use appliances, and wrecked motor vehicles.

“I see them when I’m going out, I’ll just pass by and see them,” Icil Brooks, a resident for more than 41 years, shared on Thursday, unsure of the affiliation of the trucks.

Another resident shared her dissatisfaction at how the area was being transformed into an informal commercial garbage disposal site.

Residents of the St Andrew Eastern Rural constituency have made an appeal to Member of Parliament Juliet Holness and other authorities for intervention.

Another resident, Tanya Barrett, informed The Gleaner that she fears that the area could be a disaster waiting to happen.

“I was so surprised to see how over here look ... . It (the Hope River) taking a different course, so it eating down the bank ... because here so wasn’t like that,” Barrett said.

“It does impact us a lot because, I mean, if the riverbed has the blockage at the sides and [it is not trained] ...when the river comes down .... with all these things flowing down there and whenever the rain falls and it (the earth) should get soft, well everything would be flowing down into the water,” she said, resulting in major blockage.

Realising that this may not be a safe situation to be living in, she has also called on homeowners in the area to take personal responsibility.

She noted that they could not rely only on the efforts of the MP, but should strive to make her work easier.

“Everybody have to come together and work, enuh. If the people within the community want to see a pretty, better society, then we would not be doing things like these that would endanger others,” she added.

The Hope River is widely known to flood its banks during heavy rainfall, especially in storm conditions.

Hurricane Sandy, in 2012, destroyed a bridge in the community.

The bridge was reconstructed in 2013 at a cost of $100 million, including a river-training bill of approximately $35 million.