Hylton slams Gov’t for no fixes to supply-chain crisis 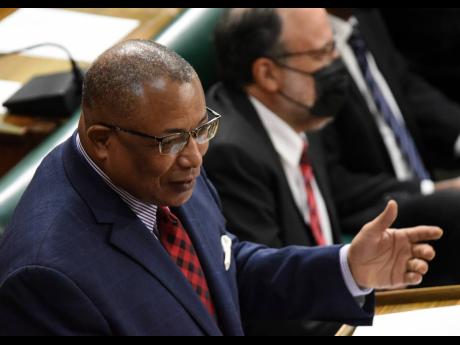 Ian Allen/Photographer
Anthony Hylton, member of parliament for St Andrew Western and opposition spokesman on industry and commerce, making his contribution to the Sectoral Debate in Parliament on Tuesday.

Opposition Spokesman on Industry, Investment and Logistics Anthony Hylton has criticised the Government for failing to outline specific solutions to the supply-chain challenges that have contributed to the elevated prices of consumer goods and services.

In a recent statement, the Jamaica Manufacturers and Exporters Association (JMEA) expressed disappointment at the latest hike in the BOJ’s policy rate, warning that the decision would lead to increases in the price of basic food items and, ultimately, risk economic recession.

According to Hylton, the Opposition and other key stakeholders believe that the central bank’s approach to fighting supply-chain-induced inflation is not likely to achieve its intended result in the short to medium term but would, in fact, increase pressure on vulnerable businesses and individuals.

He said the Opposition was clear that an effective response could not come from increased interest rates on mounting debt already owed by small and medium-size hotels and related businesses which were heavily impacted by the coronavirus-induced shutdown.

“A solution is clearly needed for the small and medium-size hotels, and it is urgent,” he said in his contribution to the 2022-23 Sectoral Debate in Gordon House on Tuesday.

The opposition spokesman argued that while the path to immediate economic recovery was tied to a rebound of the tourism industry, other areas, such as the manufacturing and creative sectors, have key roles to play in economic revival.

He said one of the lessons learned from the pandemic was the risk of overreliance on any one sector.

“The economy cannot be driven on one engine,” Hylton told lawmakers.

Hylton said that the junior minister for industry, investment and commerce, Dr Norman Dunn, did not address the supply-chain issues when he made his presentation in Parliament on May 17.

“We, therefore, are left to await the presentation of the senior portfolio minister in the Senate sometime in the future to learn about the current thinking of the administration on the problems at the heart of the price rises for several key commodities,” said Hylton, referencing Aubyn Hill.

The shadow minister argued that the muted approach by the Government in relation to supply-chain challenges was in stark contrast to other countries.

He mentioned the efforts of the Biden administration to prioritise the building of a more agile and resilient supply chain in the United States and internationally.

Other countries have set up task forces to generate action plans and strategies to address critical challenges to their economies, Hylton added.

He also spoke of plans by Barbados and Guyana to build a food terminal to facilitate the movement of agricultural produce within the region.

Hylton reiterated the Opposition’s call for the establishment of a supply chain and logistics council that would bring together key institutions, across the public and private sectors, to share critical, high-level data.

The opposition spokesman suggested that Jamaica’s business sector should review and redesign their logistics channels to ensure resilience and sustainability.

The St Andrew Western MP lauded Tourism Minister Edmund Bartlett for moving to establish a committee to oversee the setting up a logistics centre to ensure the availability of goods and services for the tourism sector.

Hylton said the Opposition was willing to contribute to the “shaping of the terms of reference of the proposed committee and to play an integral role in what must be an exercise of all hands on deck in this critical period”.