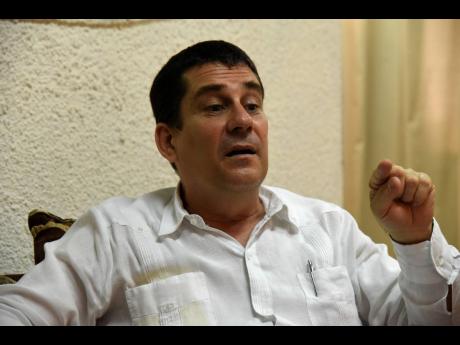 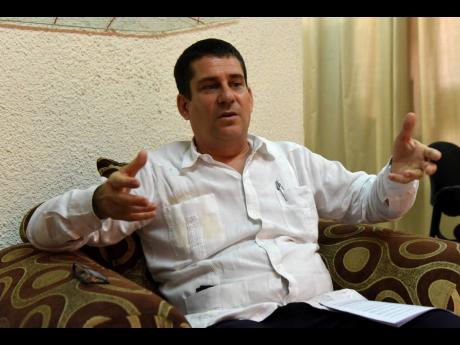 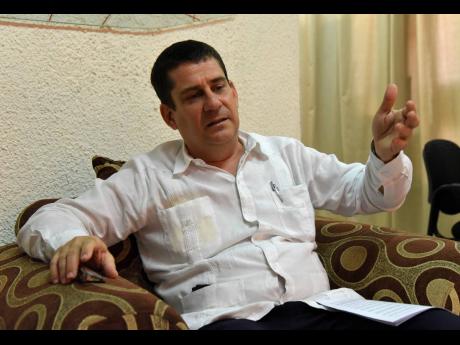 It’s not often that a seasoned diplomat gets emotional when talking about his countrymen, but Cuban Ambassador Fermîn Gabriel Quiñones Sanchéz choked up in calling them the most resilient, patriotic, hard-working and long-suffering people he knows to have endured despite “the most vicious economic blockade against them”.

Since January, Quiñones Sanchéz has been posted in the country he calls “a sister”, where he has never seen a hostile face after identifying himself as Cuban, stating with passion that the “Caribbean is not another part of the world. It is a part of our heart. That is the position of Cuba.”

He has rejected advice from others in the diplomatic community to avoid certain areas of the country as a result of crime, driving without security to the bustling Coronation Market in downtown Kingston on a Friday afternoon with his wife and another embassy staff in his first week here.

This was even before presenting his credentials to the governor general, as he “did not want to be recognised”.

“Call me crazy, but I have been finding myself around in Jamaica. I drive myself and I have been to several places. I am not afraid to travel around in Jamaica. Jamaica, like several other countries, has issues with crime, so I am careful, but I am not afraid,” the man who was head of delegation in Haiti during the devastating earthquake in 2010 and who replaced the very popular Inés Fors Fernández, who ended her tour of duty last year, told The Sunday Gleaner.

It is a big vote of confidence for the Government from a newly posted diplomat in a country with a steady flow of blood from murderous enterprises operating across Jamaica.

Quiñones Sanchéz told The Sunday Gleaner that Cubans were suffering from 60 years of United States blockade against their country, noting that it is being maintained on untrue allegations. A lot of pride was obvious despite the pain as he bared his heart on how the sanctions are impacting the young and old in the island 90 miles away from Jamaica.

It remains a constant reminder to the United States of its failure to remove the revered Fidel Castro from power. Castro served as Cuban prime minister from 1959 to 1976 and president from 1979 to 2008. His now-retired brother, Raúl, succeeded him before handing the reins to Miguel Díaz-Canel.

Washington has carried the proverbial political “belly” for Cuba since 1959, when Castro and his rebels removed the US-backed Fulgencio Batista from power and repelled the US-supported Cuban exiles in an attempted coup to remove Castro in 1961.

“For Cuban diplomats, we say we have to serve our country at any place. It is the same as going to Europe or a multinational organisation, we are serving our country. So when I was called to say that I was going to Jamaica, I was very happy for many reasons,” Quiñones Sanchéz told The Sunday Gleaner.

Among the reasons are that “I will have the opportunity to work in a sister nation where I have never been before, working with a different culture, but because we are so close as we are descendants from Africans, but with cultural differences.”

The Jamaican cultures with various ethnicities make it among the most dynamic anywhere and “we have to learn more about the history that unites us”, he stated, noting that collaboration is the preferred way of diplomacy.

But diplomacy appears to be out the window for tomorrow’s start of the Summit of the Americas.

Cuba, Venezuela and Nicaragua have been excluded and the ambassador said the summit could not be truly representative if it was exclusionary.

Their exclusion has offended St Vincent and the Grenadines Prime Minister Dr Ralph Gonsalves, who called it an affront to the leaders of the three excluded countries, appealing for greater inclusion rather than exclusionary and isolationist diplomacy.

Under the Barack Obama administration in which current US President Joe Biden served as vice president – diplomatic relations between Havana and Washington were strengthened with Cuba seeing the first visit of a sitting US president in more than half a century.

Cubans, Quiñones Sanchéz said, expected “more” from the new round of rapprochement. Their medical and tourism industries have been the largest contributors to economic development, but are badly in need of valuable infrastructural development.

Still, the country boasts enviable literacy levels of more than 90 per cent, and despite its inability to purchase raw material, its primary and secondary healthcare focus is celebrated.

Unlike some ambassadors, Quiñones Sanchéz did not have a choice in his location for placement, but was not disappointed when he learnt he was headed for Jamaica.

“Jamaica is a very important place for Cuban foreign diplomatic service and Cuban foreign affairs service for the very important role played by this country since Independence 60 years ago. Being here is extremely important for Cuban international relations, and it’s always good for a diplomat being close to home, and from Jamaica, we can smell Cuba,” he said.

He also pulled on the historical connections of both countries being colonised by Spain as part of the connection with Jamaica, original peoples of Tainos and Ciboneys and evolved over the years with assistance to Jamaica’s health and education sectors.

Jamaica, he said, was a safe place for “Cuban independent warriors during the 19th century”. In the 1878 war, the Mambises fled to Jamaica after fighting with Spain for 10 years for independence.

Cuba has welcomed embassy services, including visa issues, flights and remittances, but they are not at the pre-Donald Trump levels, with the controversial president who served in the White House between 2017 and 2021, and rolled back Obama-era gains. Cubans were then forced to travel to Guyana for consular services.

The US withdrew its diplomats from Cuba after several complained of falling ill to what is now known as the Havana syndrome, which was first reported in 2016. Diplomats in the island reported bizarre sonic sounds and sensations followed by unexplained hearing, vision and memory loss, as well as balance problems along with headache and nausea.

“The government of Cuba reiterates its willingness to establish a respectful dialogue on equal footing with the government of the United States based on the United Nations Charter without any interference in the internal affairs of states and with full respect for independence and sovereignty,” a statement from its foreign ministry said last week.

The US Transportation Department last Wednesday made it easier for Americans to travel to Cuba, lifting flight restrictions that were established during the Trump administration.

The restrictions had prevented US airline flights and chartered flights from going to Cuban cities other than Havana.

The Biden administration announced last month that it would expand flights to Cuba, take steps to loosen restrictions on US travellers to the island, and lift restrictions on money that immigrants can send to people on the island.

Ambassador Quiñones Sanchéz is convinced that the World Health Organization (WHO) is playing politics with vaccine approvals in the fight against the COVID-19 pandemic. According to him, Cuba has managed to produce its own vaccine and has vaccinated 95 per cent of its qualified population.

It is currently developing a nasal spray that would work similarly to the vaccination, as well as a suite of vaccines that would be given to children at birth among their first shots.

“Cuba could hardly find the money and we took less than US$50 million to develop Soberana 1 and 2, Abdala and Mambisa. Cuba not only produced them against the clock but against time. Now 95 per cent of the population has been vaccinated. Less than 100 persons were reported as being infected last week, and no deaths,” said Ulyses Calvo Borges, the embassy’s first secretary and consul general.

He said the US blocked donations, including masks, from third countries and frustrated Cuba’s efforts to acquire medical equipment to fight the pandemic. Despite that, Cuba produced five vaccines and applied three to the population.

About 1,000 Cubans currently reside in Jamaica, a majority of whom work in the health sector and were vaccinated with Cuba-produced COVID-19 vaccines. While other jabs were given clearance for application by the WHO, Cuba’s vaccines are still to be approved.

“Cubans just want to live, to live life to its fullest,” said the ambassador.

It’s not the only adversity facing the island currently as apart from the crippling economic constraints, the recent hotel blast, which killed several of its citizens, did extensive damage to others building nearby.

Quiñones Sanchéz bemoaned the many lives lost, noting that they were mostly young persons. The focus of the president is now on the welfare of those affected and not the rebuilding of the hotel, he said.

He described President Díaz-Canel as a modern-day leader, who continues the focus on the country’s youth, following in the path of his predecessors.

Of the then-six-year-old boy at the centre of an international custody battle between Cuba and the United States, he said Elián González is now raising a family of his own and participating in the development of his country as an engineer.