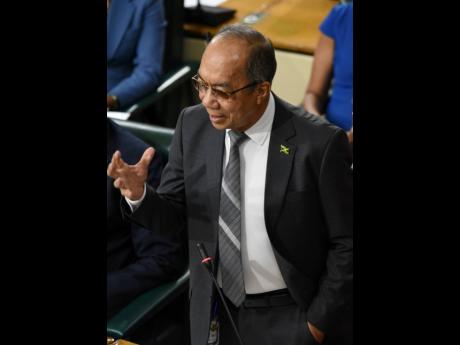 Ian Allen
“My principal concern remains, though, which is the performance of the team. We should have been further down the wicket, but we are moving at a much better pace right now”: National Security Minister Dr Horace Chang. 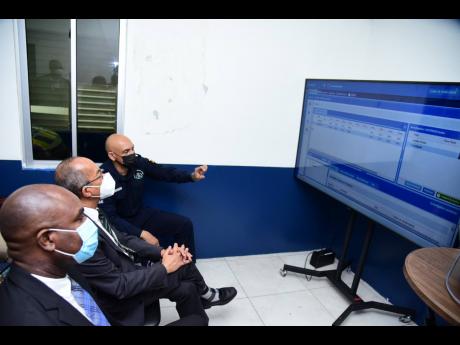 Contributed
Minister of National Security Dr. Horace Chang (second left), listens as Commissioner of Police Major General Antony Anderson (right) explains a key aspect of the Station Records Management System being implemented within the Jamaica Constabulary Force, during a live demonstration of how the system works at the Harbour View Police Station in the Kingston Eastern Division on June 9. Also pictured is State Minister in the National Security Ministry, Zavia Mayne. The system is part of the Security Strengthening Project.
1
2

It appears that the Government may have breached a tenet of the multimillion-dollar loan deal it signed with the Inter-American Development Bank (IDB) to fund the Security Strengthening Project (SSP) in the Ministry of National Security by paying...

It appears that the Government may have breached a tenet of the multimillion-dollar loan deal it signed with the Inter-American Development Bank (IDB) to fund the Security Strengthening Project (SSP) in the Ministry of National Security by paying out too much in salaries.

After seven weeks of delay, the ministry responded to The Sunday Gleaner questions on the SSP last week, but kept the names of persons who have been paid so far for work under the programme close to its chest, resisting several attempts by this newspaper to get the information.

The Ministry of National Security, however, confirmed what our sources described as significant delays affecting the implementation of the US$20-million (J$3.08-billion) project that is designed to improve the country’s national security outcomes. It blamed the COVID-19 pandemic and delays in the procurement process for the consequential setbacks that have forced the Government to approach the IDB seeking an extension for the programme, which was initially slated to wrap up early next year.

Those talks are presently under way.

“The PIOJ (Planning Institute of Jamaica) is leading negotiations with the Inter-American Development Bank towards a possible 18- to 24-month project extension in light of the two-year delay caused by COVID,” the ministry told The Sunday Gleaner via written responses last Thursday.

According to the ministry, a lean project execution unit (PEU) was established pursuant to the terms of the negotiated agreement that “administrative expenses would not be greater than four per cent of the value of the loan”.

But last week, the ministry revealed that approximately $55.3 million more than the four per cent salary ceiling in the loan agreement had been spent up to March this year.

The national security ministry was initially hesitant to provide a list of the names and posts of all the persons paid under the SSP and how much each person received. However, National Security Minister Dr Horace Chang subsequently told The Sunday Gleaner that the names of the consultants would be provided, but a decision is to be taken on whether to reveal the names of the full-time employees.

The ministry indicated that a former project director, who it did not name, was paid just more than $51 million for the duration of her contract, which was not renewed earlier this year.

“The project manager’s contract expired on March 31, 2022 and was not renewed,” the ministry stated.

‘I HAVE MY CONCERNS’

On the question of value for money, the Ministry of National Security was non-committal in its response.

“During the contracted period, the project manager was the point person for ensuring the project met the most pressing needs of its beneficiary institutions, including the Jamaica Constabulary Force, the Department of Correctional Services, and the Institute of Forensic Science and Legal Medicine, among several others. At the end of the contract period, the project had procured all the major technological systems under its scope,” the ministry said.

However, Chang was more forthright on the question of value.

“I have doubts on that one. I have my concerns. We should have gotten more out of the project,” he said, noting that he had expressed a lack of confidence in the leadership of the project team, following which Permanent Secretary Courtney Williams decided not to renew the project manager’s contract, “because, in the end, the public holds me accountable”.

The national security minister said that a new project manager should assume the office shortly.

Chang said that his concerns over the possible breaching of the salary component of the loan agreement were calmed after a discussion with the IDB.

“My principal concern remains, though, which is the performance of the team. We should have been further down the wicket, but we are moving at a much better pace right now,” he said.

He also stressed that he was prepared to call in the Major Organised Crime and Anti-Corruption Agency at the hint of any wrongdoing.

In the meantime, an email sent to the IDB seeking to establish whether it would be minded to approve the project extension request, and whether Jamaica breached the loan agreement by paying more than the stipulated amount in salaries, did not receive a full response.

“We are working to respond as soon as possible,” said Golda Lee Bruce, communications specialist at the IDB.

In addition to the just over $51 million paid to the project director, the ministry said that approximately $370.6 million was spent on “other salaries and consultancies” up to May this year, bringing the total to approximately $421.6 million.

The Sunday Gleaner was unsuccessful in its attempts to have the national security ministry clarify the two figures it provided for salary payments.

According to the ministry, the project execution unit core team comprised of the following consultants: the project director, a procurement specialist, a monitoring and evaluation specialist, a financial specialist and a project administrator.

“Notwithstanding the small size of the PEU, given the complexity of the project, several interns and consultants were engaged to lead implementation activities,” the ministry stated.

The loan agreement for the project was inked in 2017, with implementation set to begin in 2018.

“The specific objectives of the project are the training of police officers on the use of technology in crime-fighting; to increase the proportion of police investigations of murders that result in prosecution; and to reduce the rate of murders in the country,” the national security ministry said.

But as the Security Strengthening Project struggles with delays, the country’s murder rate continues to climb.

Crime statistics published by the police indicate that up to June 20, there were 686 murders, compared to 679 for the corresponding period last year.

The objective of this component is to reduce homicides through improved crime-prevention measures.

The objective of this component is to improve the rate of investigations sent to prosecution.

The objective of this component is to support the change of how Jamaica Constabulary Force (JCF) manages reports and investigations, complementing the addition of technology to existing processes, as well as to provide the training required for the successful implementation of all other project activities.

1. The programme has provided 95 per cent of deliverables for institutional strengthening to the Institute of Forensic Science & Legal Medicine and Firearm Licensing Authority.

2. It has completed procurement and commenced implementation of the case management and station record management software for the JCF. Implementation commenced on April 27, 2022, with a pilot launched at the Harbor View Police Station. A roll-out plan has been agreed with the JCF, with the expectation to connect roughly 22 more stations before end of year.

3. A private network for the Ministry of National Security and all beneficiaries has been established. To date, a total of 17 sites have been connected. Connectivity equipment and 77 laptops along with some accessories (headsets) have been provided to the JCF at a cost of approximately J$52 million.

4. A contract for the supply of a jail/correctional management software for the Department of Correctional Services (DCS) was signed on May 11, 2022; the implementation plan is now being developed.