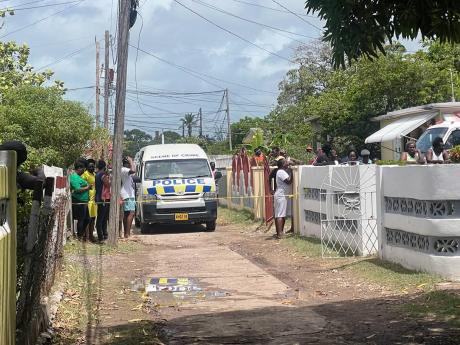 Photo by Olivia Brown
Shocked residents of Lionel Town, Clarendon, gather outside the home of the Gordons on Monday morning following news that the bedridden Pamela Gordon was murdered. The 67-year-old woman’s husband has been taken into custody by the police.

The brutal slaughter of bedridden senior citizen Pamela Gordon at her home in Clarendon, on Monday has left relatives and residents of her Lionel Town community bewildered.

Adding to the shock is the fact that Gordon’s 69-year-old husband has been taken into custody in relation to her death.

According to the police reports, about 7:17 a.m., Gordon’s grandson found the elderly woman with her throat slashed after going to make checks on her and the police were summoned.

Gordon was then taken to hospital, where she was pronounced dead.

Her husband was later arrested.

Police sources told The Gleaner that family members became concerned after a relative overseas reportedly received a call that Gordon had been killed.

Her grandson was sent to investigate, but was reportedly being barred from entering the room by his grandfather.

When he kicked open a door, he saw Gordon on a bed with blood oozing from her neck.

A fracas then reportedly ensued between Gordon’s husband and his grandson, resulting in both receiving injuries.

One source, who knows Gordon’s husband well, expressed shock at the incident, noting that he was known to be a “decent man”, who got along well with community folk, especially because of his trade as a mechanic and upholsterer.

Rocky Point Councillor Winston Maragh said the entire division had been saddened by the incident.

“I want to express my sincere condolences to the family members, [and] the community, and to appeal to anyone who has any information that can assist the police in their investigation, please, get that information to them as quickly as possible,” Charles Jr appealed.

Gordon had reportedly been working overseas, but returned home when she fell ill.