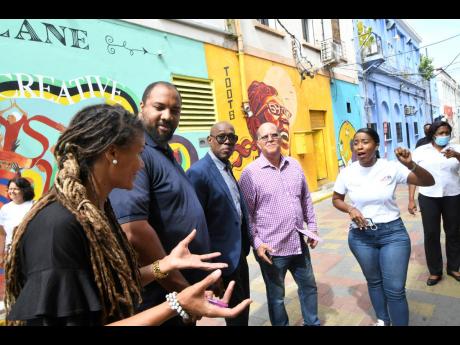 In an effort to refresh the fading walls of downtown Kingston in time for Jamaica’s 60th Independence anniversary celebrations, local creatives have partnered with paint manufacturers to offer all business owners in the commercial district a 25 per cent discount on paint supplies.

However, the creatives are uncertain, though hopeful, of whether business owners will take up the offer by the August 7 deadline.

Kingston Creative, which has put muscle behind the emerging art district in downtown Kingston since 2018, has partnered with the Jamaica Chamber of Commerce for the discount package that is exclusive to downtown business owners. Sherwin Williams, H&L Rapid True Value, BH Paints, and Berger Paints are on board.

The Transform the City for Jamaica 60 initiative was launched on Tuesday at F&B Downtown in the capital.

Jessica Cargill, operations manager of F&B Downtown, has embraced the facelift campaign, even though most of the outer walls of her business have been transformed into murals since November 2018 as part of the Downtown Kingston Art Hub Initiative.

But she is urging the wider business community to catch the vision and tap into the full development potential of the coastal city.

“We have seen increase in production from video production; people want to be here and have it as a backdrop to dancehall’s music, culture,” she said.

Andrea Dempster-Chung, the co-founder of Kingston Creative who launched the Downtown Kingston Art Hub Initiative four years ago, is hoping that business owners will take advantage of the discounts on offer.

Her group commits to continuing its support for business owners interested in a makeover – whether or not artwork adorns their walls.

The Holness administration has sought to woo developers to the capital, including with an urban-renewal investment incentive. The city has been undergoing a renaissance of sorts, with many construction and renovation projects over the last few years.

But the shadow of urban blight still looms over the centuries-old city, with dozens of abandoned buildings, ramshackle housing developments, and chronic crime putting a damper on its prospects.

With numerous downtown businesses not receiving a fresh coat of paint for years, Larry Watson, chief executive officer of the Jamaica Chamber of Commerce, believes that beautification is an important line item that merchants have not been factoring into their budgets.

“We’re going into our 60th anniversary as a country, and I think there could be no better opportunity for us to all to commit, to really refresh and transform downtown Kingston,” Watson said.

Leading by example, he said the Jamaica Chamber of Commerce recently refreshed a building it owns and rents at Parade in downtown. Not only has the real estate value increased, he said, but the renovated edifice has now “brought Parade alive”.

Ian Forbes, managing director of Sherwin Williams, believes the Transform the City for Jamaica 60 Initiative can be pivotal to the revitalisation of downtown Kingston.

“I think we need to restore downtown back to those glory days, and I think this is a tremendous start and a step in the right direction,” Forbes said.

Sherwin Williams was first approached for partnership with Kingston Creative for the painting of murals in downtown since 2019.

“It had been a very good win-win situation for both parties, and we have been fully committed,” he said.