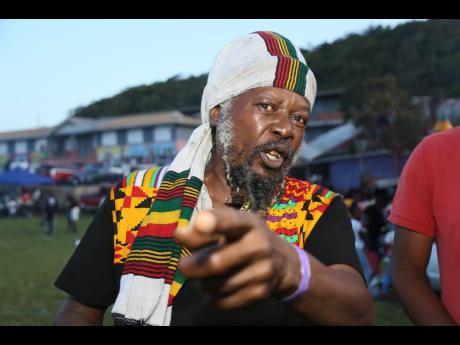 Nathaniel Stewart/Photographer
Ras Francis has lamented the absence of Afrocentric traditions at the Fus A Augus celebration in Maidstone on Emancipation Day. 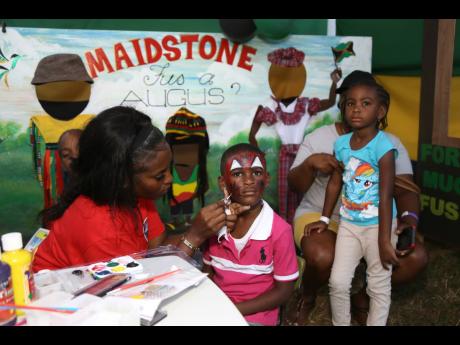 Nathaniel Stewart/Photographer
Face painting was one of the activities in which children participated at the Fus A Augus celebration in Maidstone on Emancipation Day. 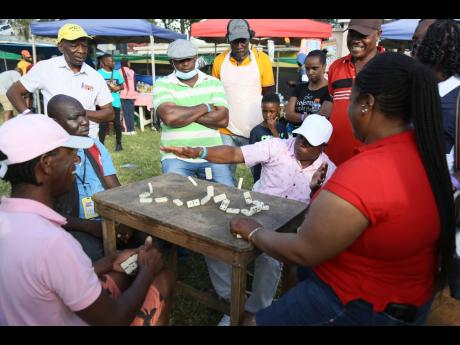 Nathaniel Stewart/Photographer
Winston Powell slams the domino table to celebrate his victory with Alroy Hewitt (left) over Juliet Bailey and Dwaine Paisley in the JCDC-organised domino competition at the Fus A Augus celebration in Maidstone, Manchester, on Monday. 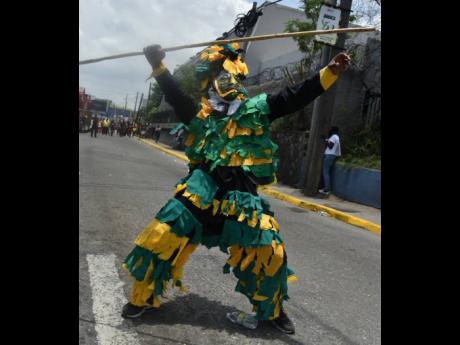 Kenyon Hemans/Photographer
A Jonkunnu performer takes to the streets of Kingston on Monday.
1
2
3
4

Culture Minister Olivia Grange has vowed to revive the flagging fortunes of Jamaica’s traditions amid mounting concerns that cultural practices are at risk of drifting into oblivion. Grange said she would be courting support from global agency...

Culture Minister Olivia Grange has vowed to revive the flagging fortunes of Jamaica’s traditions amid mounting concerns that cultural practices are at risk of drifting into oblivion.

Grange said she would be courting support from global agency UNESCO to train younger generations in fast-disappearing cultural conventions.

“There is a real problem in that some of our traditional culture, young people are not as interested, but what I’m going to be actively pursuing and put in place ... , like I did for the mento band, is to do workshops ... ,” she said in a Gleaner interview on Tuesday.

“Even in terms of building floats, and so on, a lot of those people have died, so we’re gonna have to expand training and further development of those skills, and certainly, we have to ensure the transitioning from the older folks to younger folks so we can continue to maintain these traditions,” the minister added.

Her acknowledgement of the erosion of Jamaica’s institutional memory came a day after the Emancipation Day float and street parade brought colour to the streets.

The island will celebrate its 60th year of Independence on August 6, but the scale of fallout spans beyond the capital as patrons of the Fus A Augus festival in Maidstone, Manchester, also lamented the paucity of uniquely Jamaican traditions.

Maypole, Dinki Min, and Jonkunnu performances were familiar features for the annual Emancipation Day festival, but a number of crowd favourites were absent Monday - the first staging after a two-year break because of the coronavirus pandemic.

Alroy Hewitt, winner of the domino tournament commissioned by the Jamaica Cultural Development Commission, was one of the participants dismayed by the activities.

“Mi still enjoy miself, you know, but the donkey race wid di donkey dress up in a frock, an’ dem thing, mi nuh really see it,” he added.

Hewitt said he was especially looking forward to viewing children’s involvement in culture.

Another patron who identified himself as Ras Francis said that the event did not reflect the “true meaning” of Emancipation. He was particularly critical of the absence of African-based music and dance.

That deficit, he said, was galling because Maidstone, a free village for historically enslaved people, holds such rich heritage.

Mikael Phillips, one of the event organisers and member of parliament for Manchester North Western, said it was extremely difficult to source individuals or groups based in the parish to spearhead cultural acts.

“It’s a dying thing, and that’s what we have to realise, and a lot of those persons who we would normally depend on were taken up with the various floats and different activities happening around Jamaica 60,” said Phillips, referencing the massive float and street parade in St Andrew.

“We have to realise that the persons that participate in those cultural items are a dying breed, and it’s something that has to be looked at in preserving some of these activities.”

Phillips suggested that May Pole and Jonkonnu routines be anchored in the national school curriculum.

Amid the shortcomings, Phillips said Monday’s staging was larger than the last edition in 2019.

The Emancipation Day activities included a tour of the Maidstone Museum, which houses slavery-era artefacts. On display were locally made jewellery and food such as cassava flour, turn cornmeal mix, and vegan pumpkin soup.