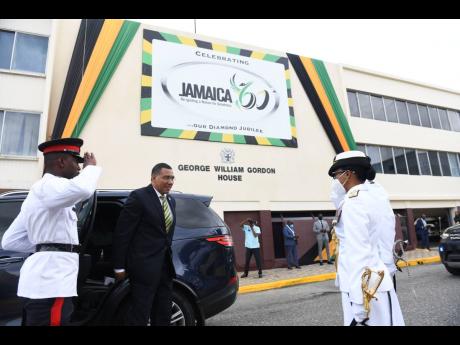 Ricardo Makyn/Chief Photo Editor
Prime Minister Andrew Holness is greeted by Rear Admiral Antonette Wemyss Gorman, chief of defence staff of the Jamaica Defence Force, on his arrival at Gordon House yesterday for a special joint sitting of Parliament on the eve of the island’s celebration of 60 years of Independence. 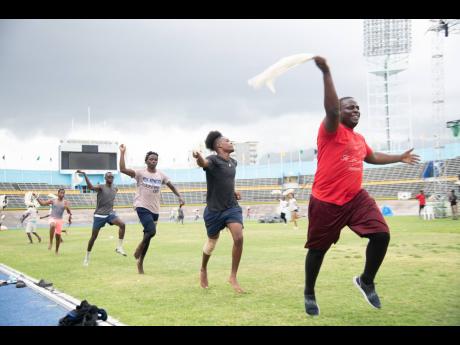 Gladstone Taylor/Multimedia Photo Editor
Dancers rehearse on Friday for this evening’s Independence Grand Gala at the National Stadium in Kingston as the island marks 60 years of political Independence. Here, they go through a routine in the African dance segment choreographed by L’Acadco artistic director Dr L’Antoinette Stines (not pictured).
1
2

Prime Minister Andrew Holness has declared that the most outstanding achievement of the nation in the last decade was the political consensus around sustainable fiscal management and debt.

At the same time, Opposition Leader Mark Golding wants Jamaica to complete the circle of political Independence by severing ties with the British Monarchy and moving away from the London-based Privy Council, which he described as a vestige of colonial rule.

The prime minister and the opposition leader made those remarks on Friday during a joint meeting of the Senate and the House of Representatives to commemorate Jamaica’s 60th anniversary of Independence at George William Gordon House.

Elaborating on the consensus around sustainable fiscal management and debt, Holness said that it started with the Fiscal Responsibility Framework in 2010. He noted that this framework was later enshrined in law with the Fiscal Rule Amendments to the Financial Administration and Audit Act and the Public Management and Accountability Act.

“In 2021, this administration went one step further to strengthen our sustainable fiscal management by passing legislation to create another institution – the Independent Fiscal Commission,” Holness said.

According to the prime minister, this institution will insulate the fiscal management from “the vagaries of exploitative and opportunistic political forces who would want to go off on a spending frolic without regard to the effects of high debt”.

Holness argued that the economic buffers that were established as a result of “good fiscal management” have enabled the country to withstand consecutive global shocks caused by the pandemic and the Russia-Ukraine conflict.

“In our 60th year of political Independence, we must be determined to complete our journey to full Independence by achieving economic independence,” he said.

The prime minister also hailed the Electoral Commission of Jamaica (ECJ) as an example of the political and civil class achieving consensus to overcome political violence that threatened peace and democracy in Jamaica.

“Today, we have overcome that threat,” he said.

Holness also saluted legislators for passing the Independent Commission of Investigations Act that established the police oversight body which has helped to put a dent in the high number of extrajudicial killings.

Holness said that 20 years ago extrajudicial killings appeared to have been an intractable problem, but today, there was a decline in the use of violent force by state actors.

The prime minister also highlighted the strength of Brand Jamaica globally, attributing this recognition to the country’s achievements in sports, its culture, Rastafarianism, Marcus Garvey, and reggae icon Bob Marley.

In his remarks, Golding said that as the country observes its Diamond Jubilee, there is much to be proud of.

He said that since 1962, Jamaica has remained a constitutional democracy governed by the rule of law and has selected governments by democratic elections and accepting the will of the people.

Golding said Jamaica has been respected for the principle of non-interference, self-determination, the rule of international law, and the pursuit of equity and justice among nations.

“These principles are the foundations of our nation’s democracy and we depart from them to our detriment.”

Golding said that Jamaica’s path to Independence was charted by the “blood, sweat and tears of our ancestors, many of whom suffered and died to secure the rights that we enjoy as citizens today”.

He cautioned that “we must never take our constitutional rights, responsibilities and democratic freedom for granted”.

According to Golding, Jamaica’s journey to full political Independence remains incomplete, noting that Jamaica’s head of State is not a Jamaican and has never lived in the country.

The Opposition leader also noted that the country’s final court of appeal remained a vestige of colonial rule situated in London with a majority of Jamaicans having no practical means of accessing justice there.

“After 60 years of standing on our own, there are few out there who still believe that we are not ready to complete the circle of our political Independence. It is time to cast aside such negative self-doubt,” he said in his address.

He called on the political directorate to coalesce to achieve the outstanding and fundamental elements of national independence, adding that further delays are an affront to our nationhood and sense of self.