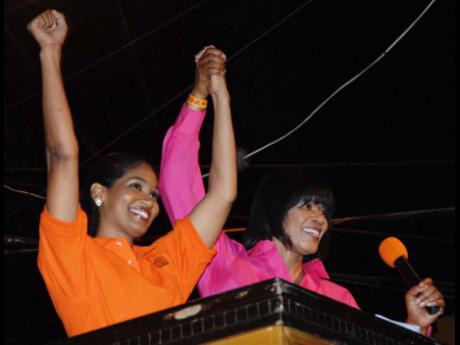 File
Then People’s National Party candidate for St Ann South East, Lisa Hanna, is accompanied by then party President Portia Simpson Miller at a rally in Brown’s Town in June 2007.

Internal strife has eroded a near impregnable support base, leaving Hanna clinging to the seat by 31 votes in the September 2020 general election.

Political commentator Shalman Scott has said that the significant deterioration of support for Lisa Hanna, owing to ongoing tensions with “influential party figures” in St Ann South East, contributed to her decision to walk away from representational politics.

He argued that the constituency, which has historically been one of the safest PNP seats in the country, has collapsed organisationally and strategically under the leadership of Hanna.

According to Scott, the PNP could “put their pot on fire and be assured that the seat is coming home for the PNP on election day”.

In 1989, the People’s National Party’s Seymour ‘Foggy’ Mullings received 9,056 votes giving the Jamaica Labour Party’s Kern Christian a political flogging, as he was only able to garner 3,290 votes.

That was one of the emphatic trouncings suffered by rivals at the hand of Mullings, who won every contested election in the seat from 1969 till he retired in 2002.

“I am not surprised at the decision that Hanna has taken,” said Scott.

He is of the view that Hanna is a shrewd politician who knew “when to hold and fold”.

Councillor Ian Bell, a once-strong ally who has fallen out with the MP, believes that her decision to step aside is in the best interest of the party.

“The fact of the matter is that the result of the 2020 election on September 3rd the persons in the constituency would have indicated to her that politics done with her,” Bell said in an interview with The Gleaner Tuesday evening.

Those tensions came to a boil with three of her four municipal councillors quitting ahead of the February 2016 general election, with the MP described as uncooperative and lacking appreciation of local politics.

That conflict was pronounced in the resistance by Richards, who led a revolt to oust Hanna as MP.

“A mistake was made and we are correcting it.”

But for constituent Vilma Grant, Hanna’s decision to call it quits caught her by surprise, but she has maintained her backing for the four-term MP.

“Lisa is a good representative and also to plenty people in my community,” Grant said in a Gleaner interview Tuesday.

“Ah nuh everybody a go like everybody, but she is okay to me. The only problem, sometimes she has some people around her that try to put her down, and that’s not right.”

Grant said she did not see anyone at the moment who could replace her.

“The fittest one that I see right now is Lisa, and mi did a expect say a Lisa a go be the prime minister, too. Mi neva expect she would step down,” Grant said.

Another constituent, a businessman who spoke on condition of anonymity, said he placed greater emphasis on performance than where the MP lived.

But he acknowledged that there was a critical mass of opposition to Hanna’s leadership that made her tenure in St Ann South East unviable.

“That’s the best thing for the constituency because it has been poor representation for a number of years, and I guess she has seen the defeat, where the JLP would take the seat,” the businessman said.

“Bad roads, people not seeing her, the party platform in that area is mashed up. If the election (of September 2020) had been put off for two more weeks she would be out,” he suggested.

Hanna first won the St Ann South East seat in 2007 and kept it in the winning column for the PNP for the next three elections.

Before her arrival in the seat, interests there had reportedly wanted Sheree Brown-McDonald, the wife of PNP power broker Denzil ‘Wizzy’ McDonald, to be given the nod to lead the constituency.

Disunity emerged years later, it was reported, after Hanna expressed dissatisfaction about alleged cost overruns associated with the refurbishing of the Moneague Post Office.