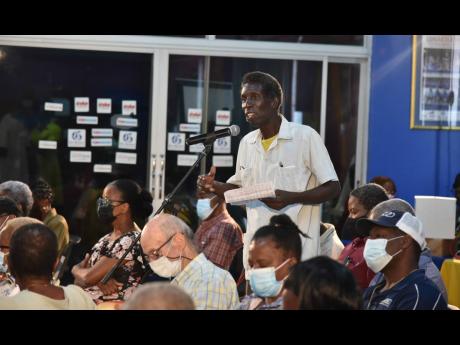 Shareholders in 1834 Investments Limited gave the go-ahead Wednesday for a scheme of arrangement that will see the merger of the remnant company with the RJRGLEANER Communications Group.

Piloting the resolution before the vote, independent director and Chairman ‘pro tem’ Monica Ladd said 1834 Investments was the result of “a partial merger in 2016, and this is effectively the final consummation of that relationship”, referring to plans for the merger.

The company was formed after The Gleaner Company, whose operations date back to the year 1834, hived off its non-media businesses and renamed itself the Gleaner Company (Media) Limited prior to the merger with Radio Jamaica Limited to form the RJRGLEANER Communications Group.

Ladd told shareholders that after the Gleaner’s media business merged with Radio Jamaica, the company that was left was “without a coherent business purpose”, being essentially a real-estate holding company, with the only real income being limited to the periodic sale of the less significant portions of its real-estate portfolio.

“1834’s income was relatively depressed, dwindling, and erratic. Dividends could not be paid, and the company’s costs were increasing as a proportion of the income,” she said.

Ladd is the widow of former Gleaner and RJRGLEANER Chairman Oliver Clarke. She filled in as chair of the 1834 Investments meeting on Wednesday in the place of Joseph M. Matalon, who is the current chairman of the boards of both 1834 Investments and the RJRGLEANER Group and would, therefore, have had a conflict of interest.

In guiding the discussion for the vote, Ladd noted that both 1834 Investments and RJRGLEANER share a commitment to a strong independent media, and that the merger would create new opportunities for shareholders to get a good return on investment.

An overwhelming majority of 1834 shareholders present voted to approve the scheme of arrangement.

It means that once the scheme receives its final stamp of approval from the Supreme Court, 1834 Investments shareholders will receive either 0.4962 RJR share per 1834 share or a cash payment of $1.29 per 1834 share, or a combination of RJR shares and cash. Ladd reminded shareholders that they should indicate their choice on the voting forms. Those who do not indicate a choice will be paid cash for the shares they own.

The scheme of arrangement will next be presented to the courts on November 24. Once approved, 1834 will then file the details with the Companies Office of Jamaica to set an “effective date” so that cash payments can be made seven days after.

The directors of 1834 Investments have given December 15 as the indicative date for when all of the share transfer and payment details should be concluded.

“This is very pleasing and demonstrates confidence by the shareholders that this was the best decision for the company,” an RJRGLEANER statement said.