Queen’s death end of an era 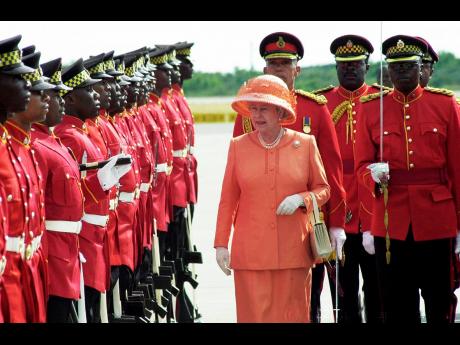 File
Queen Elizabeth II inspecting the guard of honour during her 2002 visit to Jamaica.

The death of Queen Elizabeth II will break the sentimentality with which Jamaicans hold the British crown and likely make it easier for the Caribbean nation to sever ties with the monarchy, a cultural studies scholar has said.

The Queen, who is head of state of Jamaica, died Thursday at her Scottish home, Balmoral, aged 96, capping a historic 70-year reign.

“The personhood of Elizabeth II has had a personal kind of lingering among some sections of the population and the whole royal wanderlust with Diana and Charles and the family.

“... There is another section that is clear that we have come too far with those millstones around our necks, and the fact that she has passed will mean there is less affection for the symbolism that she represents as a powerful woman in the world,” said Dr Jahlani Niaah, senior lecturer and coordinator of the Rastafarian Studies Unit at The University of the West Indies (UWI), Mona.

Niaah said The Queen’s celebrity is a significant part of the attachment that many Jamaicans have for the monarchy, maintained through royal privileges and the attention to empire.

He said that it was that same appeal that has enabled The Queen to expand the Commonwealth from seven to 56 over seven decades despite a sweeping global independence movement.

“She was a subtle and very astute politician. As much as we see a slate of prime of ministers serving her, the ethos of what British post-colonial international policies look like has solemnly been maintained by her own personal and international diplomacy.

“... That’s part of the reason why The Queen has not been removed with all the revolutionary waves going across the European society about anachronism around the monarchy,” he added.

There has been growing disdain of, or ambivalence to, the monarchy, with 56 per cent of Jamaicans wanting the Queen to be removed as head of state, a July RJRGLEANER-Don Anderson poll found.

Jamaica spent centuries as a colony of Britain until it gained political Independence in August 1962. Besides Jamaica, she was monarch of 14 other nations. She will be succeeded by son, King Charles III.

The Holness administration has signalled that Jamaica will become a republic by the time voters go to the polls to elect a new government, due by 2025.

That decision will be subject to a referendum in a bid to close the circle of Independence.

Prime Minister Andrew Holness had told Prince William, during a Platinum Jubilee visit to the island earlier this year, that the Government would abandon the monarchy.

On Thursday, Holness led in paying tribute to The Queen, saying “the world has lost a global matriarch who was a steadying and constant force throughout many crises and periods of difficulty” and who “was a close friend of Jamaica”.

Governor General Sir Patrick Allen, The Queen’s representative in Jamaica, said the late monarch was admired for her strong sense of duty and lifelong devotion to the service of others.

“She is widely acknowledged for her exemplary leadership, dignity, humility, and generosity. These qualities have characterised her reign, even into modern times, and have impacted the Commonwealth immensely.”

Opposition Leader Mark Golding also praised The Queen as “a symbol of decency, stability and continuity” who was much respected.

British high commissioner to Jamaica, Judith Slater, also lauded her for championing the development of the Commonwealth, “spanning every continent of the world”.

Meanwhile, Caribbean Community Chairman Chandrikapersad Santokhi said The Queen will be remembered for her love of and dedication to the Commonwealth, of which she was a passionate supporter and leader.