Gov’t rolls out birth certificate drive ahead of NIDS registration 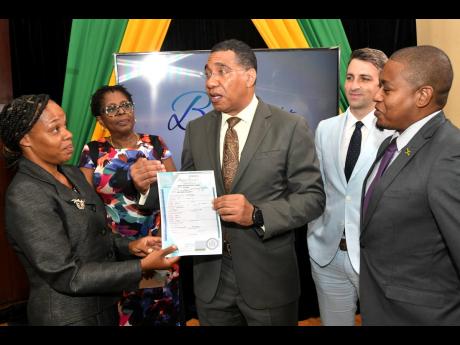 Rudolph Brown/Photographer
Prime Minister Andrew Holness (centre) presents a copy of a birth certificate to Tavia Richards (left), guardian of Ashley Williams, during a ceremony to launch Operation Birthright at Jamaica House in St Andrew on Friday. Looking on are Dr Angela Brown-Burke (second left), who represented the Opposition; Benjamin Roseth, modernisation of state specialist at the Inter-American Development Bank (second right); and Floyd Green, minister without portfolio in the Office of the Prime Minister.

The Government has launched an initiative dubbed Operation Birthright under the National Identification System (NIDS) project targeting Jamaicans who do not possess a birth certificate.

The $50-million drive will see free birth certificates being issued to up to 11,000 citizens in an effort spearheaded by the Registrar General’s Department.

Prime Minister Andrew Holness pressed home the importance of the document, noting that many citizens lost out on the opportunity to receive COVID-19 relief from the State as they lacked proper identification.

In April 2021, the Government reported that some $300 million in aid provided Under the COVID-19 Allocation of Resources for Employees (CARE) programme was yet to be collected after nearly a year.

“During the pandemic, we realised that our ability to provide welfare services was hampered by the lack of a system of standardised identification, and you would have experienced that if you wanted to access any of the CARE benefits, you first had to register,” Holness said at the launch of Operation Birthright on Friday.

“In the process of verification, the error cohort was high, meaning that sometimes the bank accounts were wrong, they were inactive, the TRN numbers were wrong, and that slowed up the ability to make these digital instantaneous payments,” he added.

The TRN is the taxpayer registration number.

A 2020 CAPRI study has also revealed that approximately 200,000 Jamaicans do not have legal proof of their identity.

According to Holness, the birth certificate is the foundational document for all other forms of identification.

“Can you imagine a Jamaica where every Jamaican from birth has their birth certificate? Walk with me down a road, a road of the future of Jamaica where all Jamaicans are documented, so they have a birth certificate, and on top of that foundational document, they now have a national identification card,” he said.

The prime minister added that Operation Birthright is part of the Government’s push toward creating a digital society and that the Government did not want any citizen to be left behind.

“As we roll out the NIDS and we make sure that everyone has a birth certificate we are also looking at ensuring that we have digital coaches. So we are going to have to take some of our young people, we are going to have to put them in a youth service programme, and we are going have to send them all around the country to help those who might be digitally challenged, and explain some of the concepts that might be foreign to a lot of our older persons,” he said.

Jamaicans can participate in Operation Birthright by getting referrals from persons such as members of parliament, representatives of community and religious groups, medical doctors, police officers, principals, bank managers, and justices of the peace.

Eligible persons must have been born in Jamaica and should be at least one year old and from a household with a monthly income of $37,000 or less.