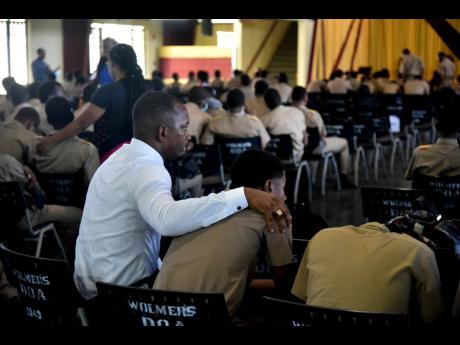 Kenyon Hemans/Photographer
Fifth-form students at Wolmer’s Boys’ School receive grief counselling Wednesday after student Raheem Shaw was shot and killed, allegedly by his father, after he was mistaken for a burglar.

Raheem Shaw was deeply invested in helping to beautify the fifth-form block at Wolmer’s Boys’ School where he was a student.

He worked with the form’s coordinator to buy flowerpots that would line the corridors.

The project, she said, is now unfinished.

About 3 a.m. on Wednesday, the 15-year-old was allegedly shot dead by his father, who reportedly mistook him for an intruder at their home on East Cave Drive in Hellshire, St Catherine.

As the news of the tragedy spread across the National Heroes Circle, Kingston-based all-boys’ school yesterday, his peers, teachers, guidance counsellors, and principal gathered in the auditorium, struggling to process Raheem’s death.

One student broke down and was escorted from the auditorium by a teacher.

Another stood at the entrance before beating a retreat to an empty classroom to cry as a teacher rushed to comfort him.

One student asked for permission to return home, the grief too much to bear.

“His supervisor, his classmates, his basketball buddies, they are devastated right now,” Principal Dwight Pennycooke said.

Just four months ago, the school was also grieving the loss of another student from Raheem’s year group.

Fifteen-year-old David Minott was believed to have drowned at Somerset Falls in Portland, where he had gone on a church trip.

“Everything is still raw,” Pennycooke told The Gleaner. “This just comes in as yet another blow ... . Frankly, it is going to take quite a bit of working through just to get everybody back to a semblance of normalcy.”

Grant, who said Raheem was one of the students who stood out in the fifth-form year group, was visibly shaken by the death.

“I am a spiritual lady and I can’t even comfort my young men because I’ll break down. I can’t give them the strength,” she said.

She shared that Raheem was an active member of the school’s business, young entrepreneurs and the young investors clubs. He was also a brilliant student who “had the potential to do so well”.

“I am really cut up,” she lamented.

His grade teacher described him as a humble student who knew how to make everybody laugh.

One of his friends agreed and smiled, recalling that Raheem was dependable and “full of vibes”.

“He was the friend that everyone would want; he was always there for us. If I wanted someone to talk to, he was there, and it was the same for me. He was literally like my brother,” the student said.