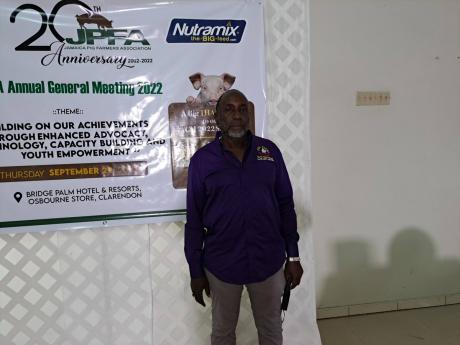 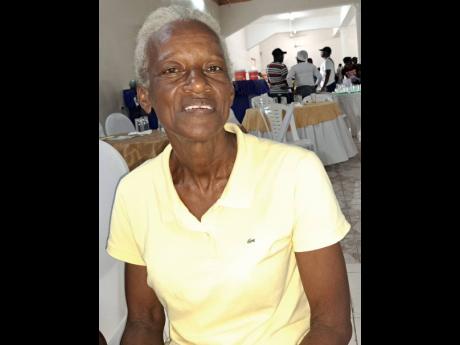 Photo by Cecelia Campbell-Livingston
Pamelita Dann wants the Government to do more for livestock farmers, proposing the establishment of storage facilities as a possible investment the State could consider.
1
2

Jamaica’s pig population has quadrupled over the last decade – from 144,917 to 593,170 animals – and with more than 18,000 pig farmers registered, Agriculture Minister Pearnel Charles Jr is hopeful that they will soon be able to meet and exceed the demand for pork in the local market.

Speaking at the 20th Jamaica Pig Farmers Association meeting held at the Bridge Palm Hotel in Clarendon on Thursday, Charles Jr said there was still work to be done as he encouraged farmers to continue on the path of growth.

He urged them to motivate youngsters to also join the sector.

“Farming is a viable alternative to crime. Farming is not just an option that people take as a side business, but if done well, can provide you with a good life and afford you an opportunity to take care of your family. You have to get out there and tell them,” he reiterated.

He also encouraged farmers to ensure that research and development is done to drive sustained growth and improvement.

“For us to improve year by year, we have to continue to interrogate and examine our methods. That’s why we are bringing in pigs with better genetics that can have better outcomes. I don’t want you to be satisfied with what you are doing in 2022. I want to make sure that year by year, we are taking the necessary investment and putting it into research,” he noted.

Pamelita Dann was one of the farmers attending the annual general meeting.

She said that with assistance from her father, she began her journey in farming as a child. Although her main activity is onion cultivation, she is hoping to expand her piggery, but she laments that there is little support for persons like her.

“Praedial larceny is one issue. Lack of funding is another,” she indicated. “Just to build a basic pen, you are looking at over $100,000, and I need three additional pens – one for boars, one for sows (female pigs) and one for the gilt (female pigs less than a year old).”

Dann is calling on the Government to invest in storage facilities, not just for pig farmers, but all who rear livestock. She said that taking on such a venture was too burdensome for farmers.

“Food security should be of paramount importance at the moment. It is the Government’s responsibility to secure food for the nation. Yes, the Government should train persons to produce meat at a professional standard and store it. That is not the citizens’ responsibility. Government needs to establish a storage facility. It is needed right now,” she said. “The war in Ukraine should have taught us that, as well as COVID.”

David Robb, who operates JDJR Farms and Meats in Clark’s Town, Trelawny, has a breeding sow population of 200 and a total of about 2,000 pigs.

Unlike most Jamaican farmers, he does his own slaughtering and processing and also gets his products to end-users.

With the Christmas season fast approaching, Robb is being proactive and has stepped up efforts to meet the expected rise in demand as this is one of the industry’s busiest seasons. Personally, however, his heaviest demand comes in January and February during the winter tourist season.