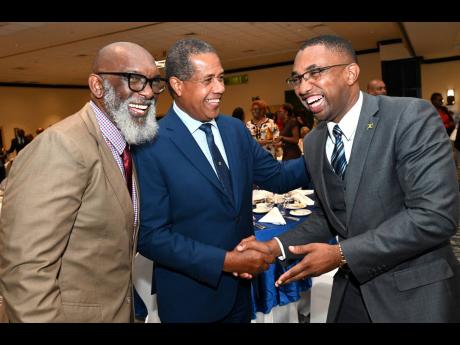 Jamaica’s investment in infrastructure to tackle organised crime needs to rack up huge successes to convince citizens that the Government is serious about addressing corruption, according to Private Sector Organisation of Jamaica (PSOJ) President...

Jamaica’s investment in infrastructure to tackle organised crime needs to rack up huge successes to convince citizens that the Government is serious about addressing corruption, according to Private Sector Organisation of Jamaica (PSOJ) President Keith Duncan.

Speaking at Thursday’s Public Bodies Corporate Governance awards ceremony at The Jamaica Pegasus hotel in New Kingston, Duncan said too many big criminals are getting away with the proverbial slap on the wrist.

“We’re putting in the infrastructural framework – MOCA (Major Organised Crime and Anti-Corruption Agency), FID (Financial Investigations Division), the Integrity Commission, [but] they must begin to catch some big fish now because [poor] people need to see examples that is not only them suffering the consequence. They need to know that there is justice for all, not just for some,” he charged.

Duncan noted that Jamaica has staged a remarkable economic recovery, which could possibly see a return to pre-COVID GDP by the calendar year based on the current growth trajectory, but he highlighted a stark contraction in terms of the trickle-down effect.

“We see efforts around social-safety nets. We see those efforts, but the conditions that we see in communities that we have underinvested in for so many decades, it’s really heart-wrenching. We need to focus on human capital investment in a real way. If we were able to reduce levels of crime and corruption, there would be more fiscal space, which would give us the ability to invest more in the public service. For example, in transportation, infrastructure such as roads, housing because we have a tonload of squatter communities – 524 across Jamaica, populated with 700,000 citizens – without proper sanitation, sewage, etc,” he lamented.

In his address, Duncan also highlighted the inadequacies of the education sector, which were pinpointed in the Professor Orlando Patterson report, which noted that 33 per cent of children leave primary school unable to read and 56 per cent were unable to write.

He said there is an urgent need to free up more fiscal space to invest in safety nets for education and health.

“If our children don’t have a solid foundation, then how are we going to build the economy that we want? The skill sets that we need to drive our economy, so early childhood education, primary education are critical to build that foundation for our people, for our children.”