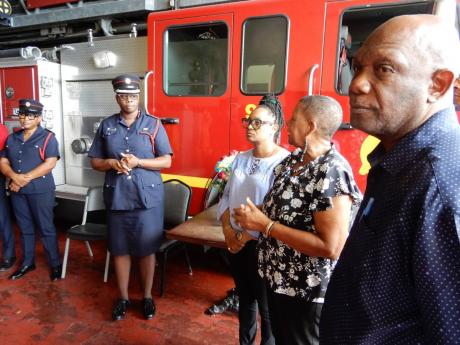 Stewart was speaking on Friday as he and several fellow councillors from the St Ann Municipal Corporation visited fire personnel at the Ocho Rios Fire Station following the tragic death of one of their colleagues on Wednesday.

Twenty-five-year-old Larenzo Douse died on Wednesday after a car crashed into the back of the fire truck, pinning him between both vehicles, as he was preparing to return to base after the crew had responded to a call.

“What has occurred is very unfortunate,” Stewart said. “My personal view is that many of the [accidents] are as a result of indiscipline along the roadway. ... There has to be some draconian measures.”

Adding that he saw a video of the accident scene, Stewart expressed that the fireman’s death could not be easy for his colleagues.

Julian Davis-Buckle, assistant commissioner in charge of the Jamaica Fire Brigade’s Area Two, and Assistant Superintendent Carol Wilmot were also at the station.

Davis-Buckle said the firefighters were still on standby to respond to emergency calls despite the difficult circumstances.

“We are trying our best to keep the parish secure just the same, in spite of all that is happening. We’re responsive; we have tools ready,” she said.

Davis-Buckle said while the Jamaica Fire Brigade was in a sombre mood, steps were being taken to provide counselling for the staff.

She further revealed that the crew that was working with Douse at the time of the accident is currently off duty.

Davis-Buckle described Douse as someone who was always quick to respond to commands.

“His willingness and his prompt [response] to command could be one of the attributes [leading] to his fate because [based on when] the officer told him that he should turn off the pump, the officer said they were of the opinion that he wasn’t there yet [when the crash occurred],” she explained.

“This cannot take away the pain, but I know it can, at times, cheer you up, they say, especially for us women who have a soft spot,” Gordon-Bailey said.

“Let us continue to pray together,” she said, urging prayers, not just for firefighters in St Ann, but also colleagues in St Catherine, where Douse’s father is stationed.

Councillors Lydia Richards, Ian Bell and Ian Isaacs were also part of the delegation from the St Ann Municipal Corporation who expressed support for the grieving firefighters.