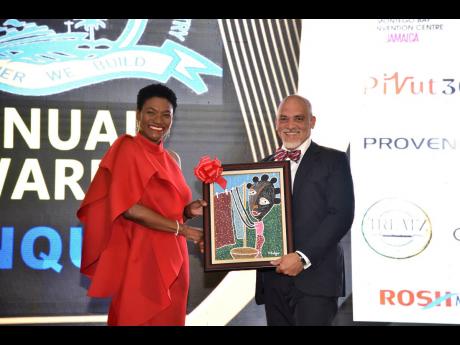 Photo by Dean Salmon
President and CEO of Scotia Group Jamaica, Audrey Tugwell-Henry, accepts a gift from director of the Montego Bay Chamber of Commerce and Industry, Robin Russell, on Saturday.

Public-private partnerships should be utilised to finance national projects geared at reversing the degradation of living conditions in Jamaica, a leading banker has suggested.

She said that there are benefits in tapping each partner’s expertise in the design and financing arrangements for mutually beneficial sharing of resource risks.

“Over the last three or so decades, we have witnessed what would have been ordinary working-class communities that thrived in the mid-’60s, or even very early ‘70s, that have degraded significantly into poor living standards,” Tugwell-Henry said while addressing business leaders at the Montego Bay Chamber of Commerce and Industry awards banquet at the Montego Bay Convention Centre last Saturday night.

“... Sometimes, even as business owners and business leaders, we do not recognise and give credence to the fact that business and commerce truly drive economic growth,” she added.

Her comments come days after Prime Minister Andrew Holness warned against the maligning of the private sector, arguing that cooperation between the Government and enterprises was integral to Jamaica’s development.

“This argument that seeks to villainise the private sector should be dismissed, and anyone who tries to make it seem that the private sector is the enemy,” Holness said at the November 23 public-private partnership contract signing between the National Water Commission and Rio Cobre Water Limited for the construction of a US$77-million (J$11.9-billion) water-treatment plant in Content, St Catherine.

“As a people, we can’t move forward unless we have a strong and innovative entrepreneurial private sector that will come and work with the Government to create the public goods that we all benefit from,” the prime minister added.

Citing flooding concerns, the Scotia Group president said she was elated to see the roll-out of 50 new garbage trucks. However, she said more needed to be done to improve waste disposal and other emergency responses.

“Poor waste disposal results in pollution of all kinds, including air and water, and as a world-class destination, it results in erosion of our shoreline that results in us losing value. Of course, the impact of climate change we are seeing right here in Montego Bay, where there’s flooding resulting in loss of life and property. If not planned properly, we will see the growth of our beautiful city becoming problematic,” she stated.

“We also need to have a robust public emergency response system for fire, medical, and other responses and integrate an ecosystem that can respond to large-scale mass emergencies, such as earthquakes, or God forbid, airline crashes, or floods and storm surges. And we need ecosystems so that we can respond and mitigate the risk of death and destruction in the face of major catastrophes,” she added.

Public-private partnerships, she said, have been relied on by Western governments for centuries.

“In early 2019, just before COVID-19, a number of projects were started and were at various stages of development. These projects were in sectors such as renewable energy, transport, water, and sanitation and were valued at approximately $2.5 billion. Notwithstanding these projects, I put it to you that there is a lot more that we can do in terms of public-private partnerships,” Tugwell Henry said.